I’m so thankful that God’s word is inerrant as every day reveals that my words are not! That was certainly the case in a short column I wrote last week for the Baptist Press, “Literacy and the Gospel.” That is why Dr. Grant Lovejoy of the International Mission Board wrote a helpful response to correct a potential misunderstanding that might have resulted from my article. His article is titled “Gospel’s Advance Can’t Wait for Literacy,” and you should read it. The main point of the article is on target, though I would challenge some of his supporting arguments.

Lovejoy highlights two assumptions that I make in arguing that a decline in literacy works against the spread of the gospel. First, my argument assumes an American context in which large sections of the culture can read. Second, my article assumes a climate in which written versions of the scriptures are readily available. Lovejoy rightly shows that these assumptions do not obtain in cultures which are largely illiterate and/or which do not have written versions of the Bible readily available. In such circumstances, he correctly says that the advance of the gospel cannot wait for literacy rates to increase or for more Bibles to become available. Missionaries and other Christians will penetrate such places with the preached word (and other oral means) long before Bibles and reading are introduced into the culture.

For what it’s worth, I did not mean to give the impression that the gospel must come “from a written text” directly to the eyes of the unconverted or to tie “Christian faith inseparably to literacy” [to use Lovejoy’s words]. To the extent that I gave such an impression, I would ask readers to forgive my lack of clarity in writing. I shall strive to do better. The gospel often spreads in advance of literacy and vernacular Bible versions. On this much we are agreed, and I thank Lovejoy for his helpful clarification on this point.

Nevertheless, some of the historical and theological arguments that Lovejoy adduces in support of his position are problematic, and to those I now turn.

Lovejoy makes an historical observation about orality in the early church: “First-century Christians might have been surprised at Burk’s assertion that Christianity is a ‘book-religion.’ Stories about Jesus and His teachings circulated widely by oral means for decades before they were written in the Gospels. Those who believed what they heard were genuinely saved and they formed authentic Christian churches without the benefit of reading a copy of the New Testament. Churches were well-established around the Mediterranean basin before the books of the New Testament were written.”

Yes, it is true that gospel traditions were originally passed down orally in the early church (e.g., 1 Cor 11:23-25; 15:3-5). But that fact by itself is hardly descriptive of the role that texts played in the life of the early Christian communities. And I daresay that first century Christians would not have been at all surprised to hear someone say that their religion is a religion of the book.

Not only was the Old Testament a seminal part of the first century church, so was the fledgling collection of apostolic writings. Acts 2:42 confirms that the earliest Christians were “devoting themselves” to the “apostles’ teaching,” which was largely an oral proclamation about the gospel and Christ’s redemptive work in fulfillment of Old Testament texts. Yet even within the canon itself, we see evidence that the writings of the apostles held sway in churches where the apostles were absent. In 2 Peter 3:16, the apostle Peter described Paul’s letters as “scriptures” (graphÄ“) a word that was used to describe the sacred writings of the Old Testament. Paul told the Colossian believers to read his letter (the epistle to the Colossians) within the gathered assembly as an authoritative apostolic word, and then to send the written letter to Laodicea so that it could be read aloud there also (Colossians 4:16). Even though large swaths of the Christian population could not read, those who could read did. They read the scriptures and apostolic writings aloud in the gathered assembly when and where they were available. For all these reasons and more, it simply will not do to imply that the presence of oral traditions thereby marginalized the prominence of texts in the early church. The historical record simply will not bear out that supposition.

Let us focus more closely upon the second part of Lovejoy’s statement just cited, “Stories about Jesus and His teachings circulated widely by oral means for decades before they were written in the Gospels. Those who believed what they heard were genuinely saved and they formed authentic Christian churches without the benefit of reading a copy of the New Testament. Churches were well-established around the Mediterranean basin before the books of the New Testament were written.”

So we are agreed that traditions circulated orally before being inscripturated. Nevertheless, that oral tradition was not preserved orally for us. It was written down (see Luke 1:1-4). In our contemporary context, when we share the gospel orally to a non-literate person, we share a message that traces back to a written revelation, not an oral one. The written word is the wellspring of gospel witness. If the wellspring dries up, then so will all oral communications of the gospel that derive from it. This principle applies cross-culturally. That’s the point I was trying to make in my article.

Lovejoy makes an assertion that raises an important theological question. He writes, “God has never limited Himself to a book as his only means of making himself known to man.” This sentence might be a point upon which Lovejoy could clarify his meaning. “Make himself known” is unclear. We agree that God reveals Himself to man in ways that don’t involve the reading of a book. For instance, general revelation is an authentic revelation of God, and general revelation doesn’t derive from a written word (e.g., Romans 1:20). However, one cannot be saved merely by observing general revelation. There must be a special revelation in order for salvation to occur. As we have seen, the apostolic witness to the gospel is only preserved for us in the written word. In other words, our only access to the special revelation of Jesus Christ that can save us is the Bible. Is Lovejoy suggesting that God gives special gospel revelation to people apart from the scriptures? I think this statement warrants some clarification.

Lovejoy also writes, “The Bible says that the Word of God is ‘alive and active,’ something that cannot be said of mere ink on paper.” This sentence too raises some theological questions. What are we to make of 2 Timothy 3:16 in light of such a statement? 2 Timothy 3:16 says that “the writings” of scripture themselves were breathed-out by God. This is why Southern Baptists affirm the verbal inspiration of the autographs of scripture (BF&M 2000, “I. The Scriptures”). This point in our confession gives a high place to the written word of God. If the scriptures are the word of God written, how can one refer to them as “mere ink on paper”?

In this last statement, I suspect that Dr. Lovejoy is merely attempting to accentuate the necessity of the Holy Spirit’s work in the conversion of sinners. To this end, he writes, “His Spirit takes the message of God â€“ whether read from a printed page, faithfully preached, or told as an accurate biblical story â€“ and in His own mysterious way impresses its truth on the listener or reader. The Spirit convicts us and confirms the truth of the proclamation.” We are absolutely agreed on this point. But I would simply point out that to say that the Spirit convicts and applies the scripture to the sinner’s heart is no argument against the Spirit’s inspiration of the written scriptures themselves. One cannot separate the effectual witness of the Spirit from the Scripture He inspires. Should we not be reluctant, therefore, to refer to the scripture as “mere ink on paper”?

My hunch is that Dr. Lovejoy and I have more in common than might appear from this exchange. Perhaps I’ve drawn some implications from his article that he did not intend, just as he did from mine. That’s okay. Neither one of us begins from the premise that our writings are inerrant. That is why these kinds of conversations can be helpfulâ€”not only to clarify misunderstandings, but also to help us become more disciplined in our own thinking about God’s revelation. My thanks to Dr. Lovejoy for the thoughtful response to my article and for allowing me to read his article before it was released in the Baptist Press. May the Lord richly bless him and make him fruitful in his work at the International Mission Board. 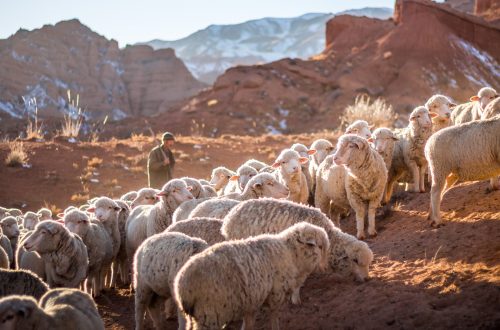