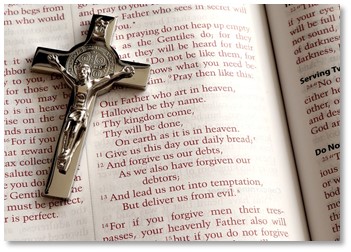 Last week, The New York Times reported that Pope Francis wishes to change the English translation of the Lord’s Prayer. From the article:

Pope Francis said the common rendering of one line in the prayer — “lead us not into temptation” — was “not a good translation” from ancient texts. “Do not let us fall into temptation,” he suggested, might be better because God does not lead people into temptation; Satan does.

“A father doesn’t do that,” the pope said. “He helps you get up right away. What induces into temptation is Satan.”

In essence, the pope said, the prayer, from the Book of Matthew, is asking God, “When Satan leads us into temptation, You please, give me a hand.”

French Catholics adopted such a linguistic change this week, and the pope suggested that Italian Catholics might want to follow suit.

I think the exegetical case for this change is pretty weak. The words and phrases simply don’t mean what Pope Francis wants them to mean. I agree with Tony Esolen, who writes:

The words of Jesus are clear. The original Greek is not ambiguous. There is no variant hiding in the shelves. We cannot go from an active verb… with a clear direct object, to a wholly different verb—”do not allow”—completed by an infinitive that is nowhere in the text—”to fall”—without shifting from translation to theological exegesis. The task of the translator, though he should be informed by the theological, cultural, and linguistic context of the time, is to render what the words mean, literally, even (perhaps especially) when those words sound foreign to our ears.

I couldn’t agree more. I do not deny that there is a hermeneutical spiral or that theology shapes our interpretation of the biblical text. Nevertheless, it is bad translation and bad discipleship to deny the meaning of biblical words simply because they don’t line up with human estimations of the way God ought to behave. In this case, it is hermeneutical malpractice to change the translation in an attempt to force God’s revelation onto a procrustean bed.

But if the words don’t mean what the Pope suggests, then what does “Do not lead us into temptation” mean? I make four suggestions that need to figure in to any faithful rendering of this text:

1. God doesn’t need us to get him off the hook.

The Pope’s translation is designed to get God off the hook for leading people into temptation. After all, if we pray not to be led into temptation, then failure to make this request suggests that God might lead us into temptation, right? Well, not so fast. As R. T. France points out:

A negative request does not necessarily imply that the positive is otherwise to be expected – a husband who says to his wife, “Don’t ever leave me,” is not necessarily assuming that she is likely to do so.”
–France, The Gospel of Matthew, 251

The Pope is trying to solve a theological dilemma that is actually no dilemma at all. Praying not to be led into temptation doesn’t mean that God otherwise would lead us into sin. It means that we are simply praying in line with God’s will.

2. God exercises agency in our trials.

The Pope wishes to deemphasize God’s agency in leading us into “temptation.” Nevertheless, the text clearly indicates God’s agency. “Lead us not” is an imperative† active verb. It’s an appeal for God to actively guide our paths away from trials of various kinds. Commentator John Nolland expresses it this way:

Various attempts have been made to spare God the responsibility for where we find ourselves. A Semitic original may have been ambiguous, but our Greek text is not. The OT is quite comfortable with the idea that God puts his people to the test (LXX peirosmos), and more generally with the idea that in an important sense we receive from the hand of God what we experience (e.g., Job 2:10).
–Nolland, The Gospel of Matthew, p. 291-92

That God leads his people in and out of testing is well-established in scripture (Gen. 22:1; Deut. 8:2), and we shouldn’t be surprised to see a similar notion reflected in the Lord’s prayer.

3. “Temptation” may refer more generally to a “trial” or “test.”

The word translated as “temptation” is the Greek term peirosmos. Its basic meaning is “trial” or “test.” For example:

“Beloved, do not be surprised at the fiery ordeal among you, which comes upon you for your testing” (1 Pet. 4:12).

“In this you greatly rejoice, even though now for a little while, if necessary, you have been distressed by various trials” (1 Pet. 1:6).

“Consider it all joy, my brethren, when you encounter various trials” (James 1:2).

In every one of these texts, peirosmos simply refers to a “test” or “trial” designed to show the true character of the one being tested. That is the ordinary sense of the term.

If “test” or “trial” is the fundamental meaning of the term, then why is it sometimes rendered as “temptation”? The reason is simple. Some tests are designed to entice a person to sin, and some are not. Context determines which kind of test is in view. Trials that are designed to entice someone to sin are precisely the kinds of “trials” that should be rendered as “temptations.” That is why Jesus’ confrontation with the Devil in the wilderness is often called a “temptation” and not simply a “test.”

“Then Jesus was led up by the Spirit into the wilderness to be tempted by the devil” (Matthew 4:1).

On the one hand, the Devil clearly intended to entice Jesus to sin through trials. On the other hand, Satan is not the only one with agency in this verse. The text says that God the Holy Spirit led Jesus into the wilderness for this test. Did the Spirit intend to entice Jesus to sin? No, he did not. God does not tempt anyone to do evil (James 1:13).

The Spirit’s design for the trial was different from Satan’s. Consequently, this one use of peirosmos is pulling double duty in this text. The Spirit led Jesus to this “trial” in order to prove Jesus’ pious obedience. The Devil intended the trial to be an enticement to sin. In other words, the trial that Satan intended for evil, God meant for good.

What sense does the term have in the Lord’s prayer? Trial or temptation? The answer is probably both. When we pray, “lead us not into temptation,” it likely means, lead me not into the trials that Satan designs to entice me to sin but which you design to prove my character.

But this raises a question. If God intends trials to prove a disciple’s character, then why would a disciple ask to be delivered from such trials? And that leads to one final observation.

4. It is good and right to pray for deliverance from trials that God intends for our good.

Scripture affirms that it is good and right to ask God for deliverance from trial. Our prayers in the midst of trial, therefore, should include humble entreaties for divine help, comfort, and deliverance.

The truth is that God plans our trials for our good. And our crying out to him for deliverance is not a rejection of God’s purpose in our suffering. Rather, it’s the expression of God’s purpose in our suffering. When we cry out for deliverance from a trial (e.g. a disease, an enemy, etc.), we are showing that our trust is in the Lord. And even if he does not give us temporal deliverance, our crying out to him demonstrates our confidence that he will eventually bring deliverance one way or the other.

So how does this work out practically? Let’s flesh it out with respect to a trial like cancer. The Lord’s prayer teaches us to pray not to get cancer (“lead us not into trial”). But if we do get cancer, it teaches us to pray knowing that even though Satan wants to use the trial for evil, God intends to use it for our good. That knowledge gives us the boldness to pray for holiness and healing (“deliver us from evil”). In short, the words “lead us not into temptation, but deliver us from evil” teach us to cry out to God in our most desperate moments and to find God right there with us in the midst of the trial.

“By prayer and supplication with thanksgiving let your requests be made known to God. And the peace of God, which surpasses all comprehension, shall guard your hearts and your minds in Christ Jesus” (Phil. 4:6-7).

To adopt the Pope’s translation is to lose the precious truth that God does exercise agency over our trials. His loving providential care extends over every area of our lives, from our deepest joys to our most profound pain. His sovereign hand over all of these things is what gives us the confidence that he has the ability to hear and answer prayer in the first place. Let’s not back away from God’s agency in our trials. Rather, let’s press into it for the Lord’s sake and for our own.

† It’s formally a subjunctive, but it functions here as a prohibition or negative command.

UPDATE: Dan Wallace has helpfully weighed-in as well. He writes:

The bishop of Rome has taken many liberties with the text, both linguistically and contextually, thereby robbing the modern reader of seeing the connections that Matthew himself has laid out…

Not only is the Greek in both Matt 6.13 and Luke 11.4 textually certain (variants for “do not lead us into temptation” are trivial amounting to minor spelling differences), but the syntax is clear. The verb in the petition “lead” is an aorist active subjunctive (eisenegkes); with the negative particle, “do not lead” is the idea. The pope wants it to mean “allow” which speaks instead of God not permitting something rather than him actively leading us. And the pontiff seems to have assumed that the Greek “lead into temptation” means “permit to fall into temptation.” …

Although Satan’s purpose was to destroy Jesus before he ever went to the cross, God’s purpose in using Satan was painted on a broader canvas. God tests; Satan tempts.