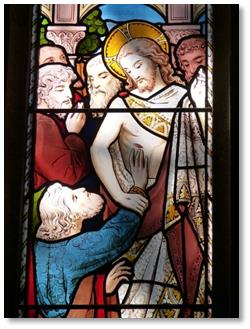 Pete Wehner wrote a moving meditation on suffering and the Christian life for The New York Times on Saturday titled “After Great Pain, Where Is God?” After sharing some gut-wrenching stories of suffering in the lives of his friends and loved ones, he asks the question: “So what, then, does Christianity have to offer in the midst of hardships and heartache?”

Wehner says that while Christianity doesn’t offer answers in the moment of suffering, it does offer consolation. Wehner points to C. S. Lewis and to Jesus himself as examples of sufferers who wrestled with doubt and uncertainty. Their examples offer consolation to all sufferers who find themselves plagued with doubt and uncertainty about God and his goodness. Wehner writes:

Perhaps because my own faith journey has at times been characterized by questions and uncertainty, I found the fact that the 20th-century’s greatest Christian apologist would give voice to his doubts reassuring. And Lewis was hardly alone in expressing doubts. Jesus himself, crucified and near death, gave voice to the question many people overwhelmed by pain ask: “My God, my God, why have you forsaken me?”

Jesus’ question, like ours, was not answered in the moment. Even he was forced to confront doubt. But his agonized uncertainty was not evidence of faithlessness; it was a sign of his humanity.

There is much good in what Wehner writes, and I appreciate his call for compassion and consolation for those who suffer. Certainly, the Christian faith offers comfort to those who despair and grieve. Nevertheless, offering Jesus as an example of “doubt” and “uncertainty” actually distorts the biblical depiction of Christ’s suffering. It also diminishes the consolation that Christ offers to sufferers. Christ’s suffering is a consolation to us not because he partakes of our same sinful humanity but because he remained steadfast so that he could redeem our sinful humanity. His faithfulness is our hope, not his faltering (which he never in fact did).

James 1:6-8 The one who doubts is like the surf of the sea driven and tossed by the wind. 7 For let not that man expect that he will receive anything from the Lord, 8 being a double-minded man, unstable in all his ways.

To say that Jesus had doubts is to make him into a transgressor. But that is not at all the biblical depiction of Jesus. Yes, Jesus can sympathize with all of our weaknesses and, yes, he was tempted in all things as we are. But He did it without sin! (Heb. 4:15)

The human condition is weak and faltering. Sometimes even the best of us experience doubt and waver in our faith. And the Bible tells us to have mercy on brothers and sisters who experience such doubt: “Be merciful to those who doubt” (Jude 1:22). But this does not mean that doubt is a virtue. It means that doubt is an evidence of our sinful brokenness from which we need redemption.

What was amazing and spectacular about Jesus’ suffering is that he never doubted His Father, and he never feared man. “When he suffered, he did not threaten, but continued entrusting himself to him who judges justly” (1 Pet. 2:23). Not only that, the Bible says that Jesus was motivated by joy to endure the cross:

Hebrews 12:2 Let us fix our eyes on Jesus, the author and perfecter of our faith, who for the joy set before him endured the cross, scorning its shame, and sat down at the right hand of the throne of God.

Jesus knew how awful the crucifixion would be before it happened (Matt. 16:21). There’s a reason that He prayed, “If it is possible, let this cup pass from Me” (Matt. 26:39). The anguish of the cross was real, and He knew it. Nevertheless, the Bible teaches that Jesus’ vision never stalled-out on death. Jesus saw right through the cross to the resurrection on the other side. You and I may fear death, but Jesus never did. You and I may doubt God’s purposes in suffering, but Jesus never did. Ever! What was definitive for Jesus was the joy set before Him, not death. Not doubt.

Imagine that. Jesus knew that they would tear His skin from His body, that they would nail Him to a post, and that He would asphyxiate while enduring cruel pain. He knew that He would be betrayed and forsaken by His best friends. He even knew that the cup of God’s wrath would be poured out on Him in full (Isaiah 53:10; Matt. 27:46). Yet “for the joy set before him, he endured the cross.” He never feared man or doubted God. He was all courage and all love all the time. If you worship the Jesus of the Bible, that is the Savior that you worship.

The model that Jesus gives us is not one of doubts and fears like our own. The model that He gives us is perfection. For that reason, we should give no quarter to the doubts and fears that we experience. We should in no way valorize them. Rather, we should pray for mercy and trust in the God who raises the dead. That is what Jesus modelled for us. And that is what Jesus died to enable us to do (Titus 2:14).

So let’s be jealous for what Jesus accomplished for us. He was tempted in every way as we are, yet He was without sin! He was obedient to His Father, even to the point of death on a bloody cross (Phil. 2:8). He never gave up, never lost heart, never flagged in zeal. And neither must we. We can take heart. Where you and I have failed, Jesus has overcome. Indeed Jesus has overcome the world—even our doubts (John 16:33).

The American Heritage Dictionary defines the verb “doubt” as follows:

When it comes to the morality of doubt, the key issue is doubt’s object. It is one thing to doubt oneself or to doubt another human being. It is quite another thing to doubt God. And it is the latter that the New Testament treats as sinful and that Jesus never experienced.