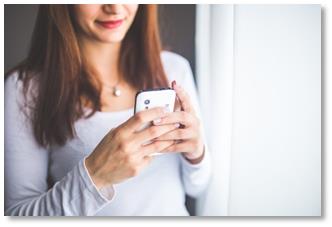 A really sad essay appeared in The New York Times last week titled “Wanting Monogamy as 1,946 Men Await My Swipe.” It is another sad story about the emotional and spiritual dead-end of the so-called “hook-up” culture. It is the first person account of a young woman and her experience with dating apps. Even though she knows that the men available on dating apps are only looking for one thing, she decides to take the plunge anyway. She ends up meeting a guy, having a 6-week tryst, falling for him, expressing her wish to be more than his Monday-night-girl, and then having her heart broken as he tells her that he has no desire for “monogamy” with her or anyone else. And so the sad affair ends with a sad young woman going back to her dating app and finding that there are 1,946 men waiting for her to swipe.

This is a sad read for obvious reasons. But what struck me about it was the conclusion. You would think that perhaps she learned a lesson about the dangers of easy hook-ups on dating apps. But that is not at all what she concludes. This is:

It’s easy to dismiss dating apps as insincere, objectifying and sketchy. But in the end, they did do one thing for me. They introduced me to Michael, someone I was willing to bend the rules for, someone I was actually able to admit I liked. And maybe there is hope in that.

Hope in the fact that there is a technology that facilitates selfish promiscuity and bad faith? Wow. I have to say that this is not the conclusion that jumps out at me.

What does jump out at me is that this story illustrates in spades that the sexual revolution makes promises that it can never keep. By separating sex from the marriage covenant, it hasn’t made people happier or freer but more lonely and alienated than they ever were before. Fidelity, covenant, an old man holding the hand of his wife on her deathbed after a lifetime of love and loss and faithfulness. These things don’t come from the fast fornication of dating apps. We were made for so much more than a degrading technology that greases the skids on human lust (1 Cor. 6:18-20). But so few in our culture seem able to see it—even when the pain caused by it is so evident.