Neil Shenvi is a scientist with a Ph.D. in theoretical chemistry from Berkley, but in recent years he has become a budding Christian apologist. He is a member of The Summit Church in Durham, North Carolina (where JD Greear is pastor) and has been putting out some really insightful, accessible material critiquing critical theory and social justice.

At a conference earlier this year, he delivered a message titled “Critical Theory, Social Justice, and Christianity: Are They Compatible?” Shenvi shows that critical theory (along with its larger social justice project) is an alternative worldview that is incompatible with Christianity. It is really well done, thorough, and devastating to the claims of critical theory.

What makes his critiques effective is that he is fair with the viewpoints he opposes. He defines terms and doesn’t caricature opponents—two items that are often lacking in some conversations about social justice. He is more interested in light than heat.

He has made the video of these talks available (see above) as well as his manuscript. If I were to describe everything that is helpful about Shenvi’s presentation, I would end up reproducing the entire thing. So I’m just going to give you a taste and then encourage you to go over to his website and read the rest of it for yourself (or watch the video above). In one section, Shenvi refutes the claim that says, “We need to liberate our theology from privileged groups.” He writes:

I’ve heard many Christians correctly observe that modern evangelical authors are overwhelmingly white men. They argue that writers and theologians from cultures other than ours will have a unique perspective from which we can greatly benefit. This limited claim is reasonable. Our culture does have blindspots and these blindspots will affect our interpretation of the Bible.  Consequently, it is useful to read authors from outside our culture and outside our time period who can give us alternate perspectives. 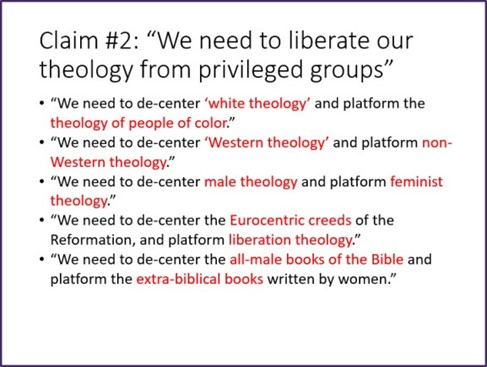 On the other hand, Christians should be wary of the sweeping (and vague) claim that we should ‘liberate our theology from privileged groups’

While we can indeed benefit from the study of multiple perspectives, we can’t assume that oppressed groups are correct by virtue of their oppression or that dominant groups are wrong by virtue of their privilege. Rather than trying to find theological beliefs that aren’t tainted by privilege, Christians should be committed to determining which theological beliefs are objectively true because they are taught by Scripture, regardless of their origin.

Shenvi concludes his presentation with some really wise, biblical advice for future dialogue about these sensitive topics. It’s easy to alienate and divide from theological opponents. But if you actually desire to persuade people to hear and believe the truth, then you need to take every one of Shenvi’s suggestions seriously. They are spot-on. Among one of his more sage observations, Shenvi argues that calling fellow Christians “Marxists” is probably not the best way to persuade people to listen to you.

Here are links to the manuscript version of his presentation, which he has broken into four parts:

Part 1 – What is critical theory and why should we care?

Part 2 – Conflicts Between CT and Christianity

Part 3 – Critical Theory in the Church

Read all of them. You’ll be glad that you did.