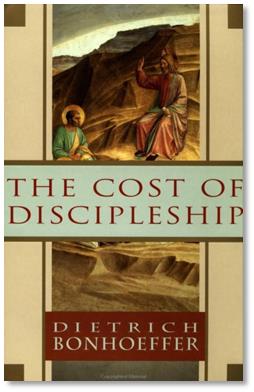 In his book The Cost of Discipleship, Dietrich Bonhoeffer describes in vivid terms what he means by cheap grace:

Cheap grace is the deadly enemy of our Church…

Cheap grace means grace as a doctrine, a principle, a system. It means forgiveness of sins proclaimed as a general truth, the love of God taught as the Christian ‘conception’ of God. An intellectual assent to that idea is held to be of itself sufficient to secure remission of sins… In such a Church the world finds a cheap covering for its sins; no contrition is required, still less any real desire to be delivered from sin. Cheap grace therefore amounts to a denial of the living Word of God, in fact, a denial of the Incarnation of the Word of God.

Cheap grace means the justification of sin without the justification of the sinner. Grace alone does everything they say, and so everything can remain as it was before… Let the Christian live like the rest of the world, let him model himself on the world’s standards in every sphere of life, and not presumptuously aspire to live a different life under grace from his old life under sin….

The “cheap grace” that Bonhoeffer warns about is actually no grace at all. Nevertheless, this notion of grace has become all too common in many evangelical churches today. Perhaps you have heard it before. It is the grace that promises to rescue us but not to renew us. It is the grace that offers to save us from hell but not from our sins. It is the grace that accepts all sinners into the church but offers no discipline for sin within the church. Any so-called “grace” that leaves a man a slave to his sin is really no grace at all. Why? Because grace isn’t merely deliverance from judgment. It is deliverance from what makes us worthy of judgment. The apostle Paul says it this way:

“For the grace of God has appeared, bringing salvation for all people, training us to renounce ungodliness and worldly passions, and to live self-controlled, upright, and godly lives in the present age.” –Titus 2:11-12

The true grace of God teaches us “to renounce ungodliness and worldly passions, and to live self-controlled, upright, and godly lives in the present age.” Grace doesn’t merely forgive sin. It conquers it.