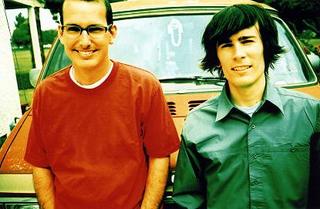 Craig Gross and Mike Foster (pictured above) launched their ministry in 2002 by attending a pornography trade show in Las Vegas, Nevada. At the event, Gross and Foster promoted the new ministry by dressing one of their spouses like a bunny on the tradeshow floor.

Not surprisingly, their ministry methods have received much criticism from other Christian groups (like the 700 Club).

Gross and Fosterâ€™s justification for their methods can be summed up in their quirky philosophy of â€œincarnationalâ€ ministry. In fact, Grossâ€™ new book â€œis about so deeply feeling the work of Christ that pulled us out of our gutters that we re-enter the gutters in order to call others out as well.â€

Here is one area where I am in agreement with the 700 Club. Gross and Foster have indeed stepped over a line. However, we should note that no one discovers where that line is by flighty speculations about â€œWWJDâ€ (What would Jesus do?). The better question is â€œwhat does the Bible say Jesus did and said.â€

Jesus is the one who shocked His listeners with the radical idea that itâ€™s not just acts of immorality that offend God, but the thoughts also.

The apostle Paul commands us to â€œput on the Lord Jesus Christ, and make no provision for the flesh in regard to its lustsâ€ (Romans 13:14). This text simply means that Christians are not only to avoid sin, but also any situation or occasion in which one is prone to fall.

What Is a Woman?