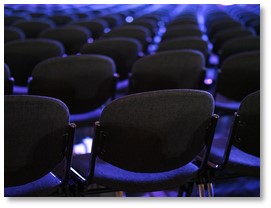 I’ve had a number of readers ask me about my thoughts on the upcoming Revoice conference. For those of you who haven’t heard, this is a conference featuring celibate gay identity proponents such as Wesley Hill and Gregory Coles. For those asking, I have heard about the conference, but I haven’t written about it for two reasons:

1. I’ve already written extensively about the celibate gay identity movement. For starters, you can check-out the book that Heath Lambert and I co-authored Transforming Homosexuality in which we argue that same-sex attraction and sexual orientation are morally implicated in scripture. I make a similar case in an article I wrote for The Journal of the Evangelical Theological Society titled “Is Homosexual Orientation Sinful?” More recently, I wrote a review of Gregory Coles’s book that takes a critical look at his version of celibate gay identity. There are many more items I could point to, but that’s a start. The point of view I’ve argued for is the one you’ll find in The Nashville Statement and in the work of Sam Allberry, Rosaria Butterfield, and Kevin DeYoung among others.

2. The conference hasn’t happened yet. I don’t know what this conference may or may not contribute to the ongoing debate among evangelicals about sexual orientation and gay identity. My hunch is that there probably won’t be anything new from this conference about that subject. But if there is, I’ll likely write about it then.

In the meantime, it is accurate to point out that evangelicals have not come to a consensus about these issues, and this lack of consensus cannot hold. We will either unify or splinter. I think there is evidence that some splintering has already occurred, and I think that is inevitable given the importance of the issue.

While I am grateful that so many of those on the other side of this are embracing a biblical view of marriage, I do believe that they have adopted an unbiblical view of human identity—one that treats same-sex attraction as a matter of moral indifference and homosexual orientation as an identity to be embraced. I think a more faithful, biblical vision is reflected in The Nashville Statement, and I commend it to readers who are looking for a confessional standard reflecting what the Bible teaches about these things.

We have yet to reach unity and consensus on these matters. I hope and pray that we will.

Postscript: Notice this break-out session (see below). It advertises a seminar about “redeeming queer culture.” It seems to presume that there will be some kind of “queer treasure” in heaven. Again, this kind of thing is pretty standard in Christian gay identity literature—the idea that there is something praiseworthy about “queerness” or gay identity that will make it into Heaven with us. 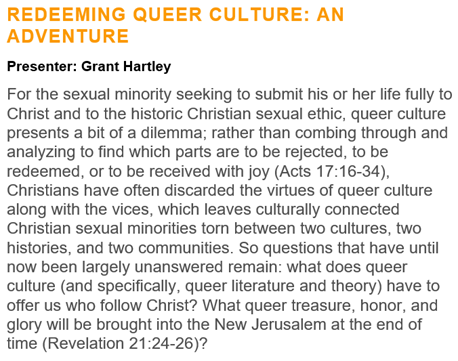