I know Bono did not want this tour to be about nostalgia, but for us it certainly was. We wanted to hear them play the old stuff, and that’s exactly what they did. It was lump-in-your-throat spectacular. In fact, I got a little verklempt when “Where the Streets Have No Name” began to ring out (see video above). It was unbelievable. As Bono began singing, a giant UPS jet flew so close to the stadium that it looked like it might land on us. It slightly terrified everyone, which I think only added to the excitement of the performance.

Anyway, our overall experience was a good one. We are earbud consumers of music these days, and it’s good to experience an event with enough subwoofers to shake your insides while you listen. It was a fantastic show. One that we will never forget.

I am not going to write a proper music review here. Nor am I going to reflect on the legacy of the iconic album “The Joshua Tree” (for that, read Mike Cosper’s excellent piece). My aim is to offer some reflections that have less to do with the music itself than with the message of the performance. And there is no question that U2 is trying to deliver a message on this tour.

1. In an interview with Rolling Stone, Bono said that he wanted to bring the “The Joshua Tree” into 2017. Songs like “Bullet the Blue Sky” were originally written to critique President Reagan’s foreign policy in South America back in the 80’s. Bono wanted to take such messages and apply them to current events. But he says that he wanted to do so without alienating red state America who voted for Donald Trump. In his own words, Bono says:

I also think it’s very, very important that people who voted for Donald Trump feel welcome at our show. I think they have been hoodwinked, but I understand and I would not dismiss the reasons why some people voted for him. I think people on the left really need to put their ear closer to the ground. I do this thing where I say, “The party of Lincoln, the party of Kennedy and those in between holding on, those letting go of the American Dream are welcome.” This is the most important line: “We’ll find common ground by reaching for higher ground.”

Even though the political critique wasn’t as severe as it could have been, it was nevertheless very clear. You have to appreciate the effort to mute the criticism, but it was still there. Any Trump voter paying attention would have understood that Bono was coming down on their guy. 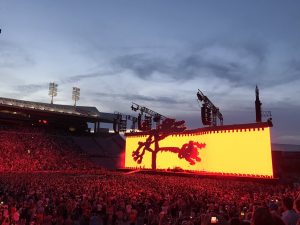 2. Related to that last point, Bono fans tend to treat him like a religious leader. When he speaks, there is a worshipful hush and a nodding of heads as the sage holds forth. Bono must be accustomed to this kind of reverence because he presses into it. This show was without question the most preachy one I have ever attended. Don’t get me wrong, I think Bono is a good man. I admire his compassion, his commitment to relieving suffering around the world, his emphasis on forgiveness and love. He puts his money where his mouth is. I think he is sincere and good, and I do not wish to critique him personally.

Still, I couldn’t help but feel there was more platitude than substance. For example near the end of the show, Bono exhorted all of us that we needed to put aside what divides us. It doesn’t matter if you’re from the left or from the right, from the blue or from the red. If we can all just focus on the “one” thing that is more valuable than anything else, we could all be united in spite of our differences. And then he concludes that we all just need to focus on the “one.” And then he went into the song “One” with no further explanation of what the “one” is. It felt like that moment in City Slickers when Curly tells Billy Crystal that the secret of life is “one” thing but then doesn’t tell him what the one thing is. Bono insists that we need to be united in our commitment to the “one,” but he gives us not one clue what principle unites us.

The end result of this leaves you feeling pretty thin. What principle or person could possibly make us put aside our differences? What could possibly make war and poverty cease in the world? What could move the human heart to love when it is currently so given to hate? Inspiring as it is, it is not going to be a U2 concert. Nor is going to be the force of Bono’s personality. Nor is it going to be the music. Bono leaves it to us to find the “one” thing that will put everything right. It seems to me that the “one” thing isn’t a principle but a Person–Jesus Christ the savior of the world. Perhaps that is what Bono wishes to imply. It is hard to tell, however, when he lionizes personalities and principles that foment the very division that he wishes to overcome. Which leads to one final observation.

3. The encore for this show is an ode to women activists. As the band plays “Ultraviolet,” there is a giant screen featuring the likes of Sojourner Truth, Rosa Parks, and Ellen Degeneres. As I was watching these faces light up screen, I couldn’t help but think: “Hmm. I think one of these things is not like the other.” But Bono explains his rationale:

Great leaps forward of consciousness have a feminine spirit. Men start to look like [women], they grow their hair long. It’s a funny thing, the Renaissance. … Whenever you see the feminine spirit there’s usually a jump in consciousness. In the One Campaign we’re leading with, “Poverty is sexist.” It’s a campaign run by women. And I’m just watching, stepping back, to be the kind of town crier that I used to be. I’m still banging on drums, but I’m in the background. The singers are women. I’m amazed by it.

The actual execution of this “ode to women” is pretty heavily tilted toward pop culture icons. But it was very clear that second and third wave feminists are also prominent–Gloria Steinem, Betty Friedan, etc. And yet, the movement that Steinem and Friedan represent has given us one of the most divisive ideologies on the planet. Whatever your opinion of feminism, we can all agree that it is not the “one” principle that unites us. Not by a long shot.

Bottom line: This was a fantastic concert, and we enjoyed every minute of it even if it was a bit preachy. We didn’t come for that anyway. We came for great music delivered by one of the best bands of all time. That is what we got, and it was a fantastic show.