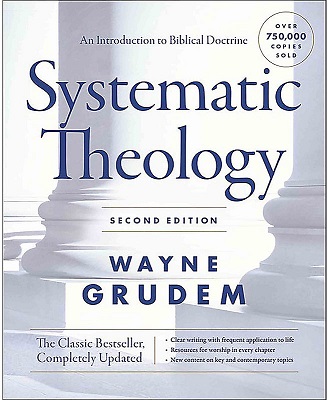 The long-awaited second edition of Wayne Grudem’s Systematic Theology has just been released. Having sold three-quarters of a million copies, the first edition of this book has been a mainstay among evangelicals. And not just among folks attending seminary or Bible college (although Grudem’s work has certainly been ubiquitous there). This book has connected to countless laypeople in the pews who have wished for a simple introduction to Systematic Theology in a way that connects them directly to Scripture. That is why Grudem’s first edition has proven to be so influential and enduring, and it’s why the second edition likely will be too.

One of the key items of interest in this second edition is Grudem’s chapter on the Trinity (Chapter 14). Grudem’s views on the Eternal Functional Subordination (EFS) of the Son to the Father were at the center of the 2016 “trinity debate,” and so was the first edition of this work. In that first edition, Grudem penned an appendix against eternal generation while arguing for EFS in the body of the work. Everyone wanted to know whether any of that would change in this new edition.

Well, it did. And it changed in a big way. Grudem drops the appendix and incorporates an argument for eternal generation within the main text and concludes, “we can affirm with confidence the eternal generation of the Son” (p. 298).

Fred Sanders notes in his perceptive review that there are two “big news” items in this new edition—Grudem’s reversal on eternal generation and his doubling down on EFS. Sanders registers his major disagreement with Grudem over the latter, but says that the former is the more important development. In my reading of the chapter, I have to agree with Sanders. Eternal Generation is a watershed biblical doctrine and the sole ground of personal distinctions among the members of the Trinity. That Grudem has embraced this and rewritten this chapter around that reality is an enormous change. The chapter is incalculably improved because of it.

But what of the latter? Has Grudem doubled-down on EFS as Fred Sanders and others have reported? Both Sanders and now Luke Stamps view the double-down as a drawback to the second edition—Stamps more so than Sanders:

So what gives? Has Grudem doubled-down on EFS? The answer to that question depends entirely on what one means by EFS, and it is here that I feel like some folks are talking past one another even four years after the great debate of 2016.

As Mediator, the Son is subordinate to the Father, calls him God, is his servant who has been assigned a task and who receives a reward for the obedience accomplished. Still, this relation between Father and Son, though most clearly manifest during Christ’s sojourn on earth, was not first initiated at the time of the incarnation, for the incarnation itself is already included in the execution of the work assigned to this the Son, but occurs in eternity and therefore also existed already during the time of the Old Testament… Scripture also clearly… sees Christ functioning officially already in the days of the Old Testament

I know, I know. This is a translation. Also, Bavinck is expounding “the covenantal life” of the Trinity, and Grudem is obviously talking about something else. So the analogy doesn’t hold, right? Well, not so fast.

They are in fact both saying that the Son obeys the Father in eternity. That is his “function” as it were. And you can multiply examples of this kind of language from other Reformed theologians, especially in their explanation of the pactum (which is what Bavinck is discussing in this particular excerpt). Grudem doesn’t base his views on the pactum, so there are differences with Bavinck. But my point is simply that the mere observation of filial obedience in eternity is not the key point of contention in the trinity debate. For there is a long track record of speaking of such obedience as a trinitarian doctrine. The key point of contention lies elsewhere—namely, in questions like these:

1. Do authority and submission displace eternal generation as the ground of personal distinctions within the immanent trinity?
2. Does one’s articulation of eternal submission entail a denial of the singular Divine Will?
3. Does one deny authority as a divine attribute that is shared equally by all members of the Godhead?

In other words, the key point of contention was always whether the Son’s subordination is a feature of the economy or of the immanent trinity. Theologians like Bavinck have long spoken of the Son’s submission to the Father in eternity while answering a clear no to each of the three questions listed above. They view the Son’s submission as voluntary (not necessary) and as a feature of the trinitarian economy—an economy that commences in eternity and prior to the incarnation.

When Scripture discusses the way in which God relates to the world, both in creation and in redemption, the persons of the Trinity are said to have different functions or primary activities. Sometimes this has been called the “economy of the Trinity,” using economy in an old sense meaning “ordering of activities.” (In this sense, people used to speak of the “economy of a household” or “home economics,” meaning not just the financial affairs of a household but all of the “ordering of activities” within the household.) The “economy of the Trinity” means the different ways the three persons act as they relate to the world and (as we shall see in the next section) to each other for all eternity (Systematic Theology, 2nd ed., p. 292).

As you read Grudem’s discussion in the pages following the excerpt above, it is clear that when he speaks about “functions” and “roles” of trinitarian persons, he is referring to the economy not the immanent trinity. In fact, he stipulates that “Economic subordination should be carefully distinguished from the error of ‘subordinationism,’ which holds that the Son or Holy Spirit are inferior in being to the Father” (p. 300, n. 52). In all of this, Grudem portrays subordination as a feature of the economy, not of the immanent Trinity.

As for the immanent trinity, Grudem identifies the relations of origin as the ground of personal distinctions (p. 297). The Father’s directing and the Son’s submitting are fitting with and a consequence of the eternal relations of origin (p. 302), but they are nevertheless a part of the trinitarian economy.

It is safe to say that my reading of Grudem’s “doubling-down” is a little more sanguine than Sanders’ and Stamps’. Grudem’s affirmation of eternal generation seems to have penetrated his entire presentation in important ways. Having said that, I still have some differences with Grudem. There are a number of items I would push back on and would have written differently. One key difference relates to the Covenant of Redemption. The Covenant of the Redemption is a well-established trinitarian doctrine that best accounts for how the trinitarian economy commences in eternity. Grudem doesn’t hold to the pactum, but I think it would clear away some confusion if he did. Grudem does, however, rely on John Owen’s work on the pactum to explain how the Son’s submission to the Father does not contradict the single divine will:

This is what Grudem has in mind when he speaks of “three distinctive expressions of the unified will of God” (p. 307).

The second edition of Grudem’s Systematic Theology is now available. By all means, buy it and read this material for yourself. Test and see whether these observations bear out. There will be much more to discuss than I have covered here. Nevertheless, this is a volume that has been a tremendous gift to the church over the years, and I am sure it will be for many more—even as the so-called “trinity debate” continues to unfold.