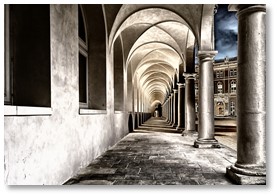 Rosaria Butterfield and I have published an essay dealing with controversy surrounding the Revoice conference and the Spiritual Friendship project. Among other things, we try to show that a great deal of this controversy is due to conflicting theological commitments between Protestants and Catholics. To that end, we write:

We go on to state that the differences between Protestants and Catholics on these points go back for half a millennium. Today, a friend wrote to me and pointed out a stark example of this from The Council of Trent (1563). The Council of Trent was a Roman Catholic ecumenical council that sought to counteract the Protestant Reformation. In section 5 of the fifth session, the Council says this:

This holy synod confesses and is sensible, that in the baptized there remains concupiscence, or an incentive (to sin); which, whereas it is left for our exercise, can not injure those who consent not, but resist manfully by the grace of Jesus Christ; yea, he who shall have striven lawfully shall be crowned. This concupiscence, which the apostle sometimes calls sin, the holy Synod declares that the Catholic Church has never understood it to be called sin, as being truly and properly sin in those born again, but because it is of sin, and inclines to sin. And if any one is of a contrary sentiment, let him be anathema.1

Notice the underlined portion. This Roman Catholic council acknowledges that the Apostle Paul calls concupiscence sin, and yet the Council ends up disagreeing with the apostle! It is really astonishing, but it does illustrate why Protestants have disagreed with Roman Catholics on this for so long. No one has the right or authority to gainsay the words of holy scripture, and yet that is what we think is happening on this important issue.

1 Philip Schaff, The Creeds of Christendom, with a History and Critical Notes: The Greek and Latin Creeds, with Translations, vol. 2 (New York: Harper & Brothers, 1890), 88.