I just saw the news about the death of comic book mogul Stan Lee. I don’t know much about Stan Lee the man, but I do know something about the characters and worlds he created within Marvel comics. Lee’s stories and characters were a big part of my childhood. He didn’t create stereotypical superheroes. He humanized them in ways that a kid like me could relate to. The New York Times describes his work this way:

Under Mr. Lee, Marvel revolutionized the comic book world by imbuing its characters with the self-doubts and neuroses of average people, as well an awareness of trends and social causes and, often, a sense of humor.

In humanizing his heroes, giving them character flaws and insecurities that belied their supernatural strengths, Mr. Lee tried “to make them real flesh-and-blood characters with personality,” he told The Washington Post in 1992.

“That’s what any story should have, but comics didn’t have until that point,” he said. “They were all cardboard figures.”

This is absolutely correct, and it is why Lee’s signature character Spider-Man captured my imagination when I was in the fourth grade.

That year, my family had just left a town I loved and had moved to a small river town in east Texas. The transition was particularly difficult for me. I didn’t fit in. The other kids called me a “city-slicker.” I had never been in a fight or even seen one before moving to that town, but I got punched in the nose on almost the first day of school after we moved there. The two years we spent in that town were difficult for me in many ways. I just didn’t fit in. And in that town, the other boys liked to fight kids who didn’t fit in. 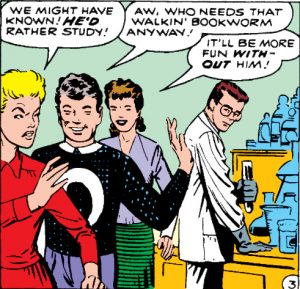 Not long after we moved to town, NBC started a new line-up on its weekly Saturday morning cartoons (anyone remember those?). And one of the new programs was “Spider-Man and His Amazing Friends,” which Stan Lee himself narrated. Peter Parker was not a jock or a tough guy. He was a nerd. He got picked on and bullied at school. He didn’t fit in. That all changed after a freak accident resulted in his acquiring superhuman powers. But he didn’t stop being a nerd after that. He was still awkward, quirky Peter Parker. He just had a new side of himself that no one else could see. And through it all, he was good humored about it. He was no Bruce Wayne or Clark Kent. He was a dirt-poor, joke-cracking nerd with secret powers. What’s not to like about that? I know I did.

That Saturday morning cartoon was a gateway to Spider-Man comics and to the entire Marvel universe. I liked all the Marvel characters, but my favorites were Spider-Man, Captain America, and the Avengers. I could not have imagined then how big those characters would become in my adulthood to movie-goers around the world. I loved those characters and still do. I’m not even close to getting tired of these movies. As far as I’m concerned, it’s a golden age for film (sorry Ross Douthat).

Stan Lee was 95 years old when he died. He will be missed, but his characters live on. And I will always be grateful for them. Excelsior.

As for the days of our life, they contain seventy years,
Or if due to strength, eighty years,
Yet their pride is but labor and sorrow;
For soon it is gone and we fly away…
So teach us to number our days,
That we may present to You a heart of wisdom.