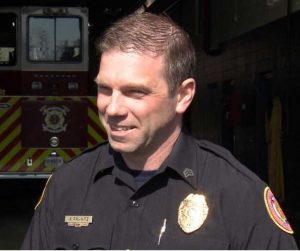 Mike Frantz is an elder with me at Kenwood Baptist Church, and he’s a student at Southern Seminary. Mike has also served as a fireman in our fair city for the last twelve years. He’s a devoted follower of Christ and a close friend.

Yesteday morning, Mike and two of his fellow firefighters had a really close call with a fire at an apartment complex. Monica Markin was on her third floor balcony screaming when Mike and his partners arrived. Mike’s partners climbed the ladder first to rescue the woman, and Mike was about 20 seconds behind them. When the first two men reached the top, a fireball engulfed the balcony with 1,000 degree flames—a fire so intense that it melted the ladder Mike was climbing on. The two firemen on the balcony threw Ms. Markin into a corner and covered her with their bodies. The picture below is what the balcony looked like when the fireball ball took it over. 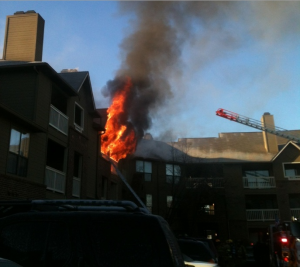 Mike continued up the ladder thinking that the victim must surely have perished and that he needed to rescue his buddies. Though all three men were burned, none of them sustained life-threatening injuries. Ms. Markin’s injuries were the most severe as she suffered burns over about 80 percent of her body. Though she was in critical condition yesterday, she is now expected to live.

Although we are praying for the full recovery of everyone who was injured, we are as proud as we can be of our fellow elder Mike Frantz. We are grateful to God that there are men who run into fires instead of away from them. We have a real live hero in our midst, and we are mostly grateful that God preserved his life yesterday!

Our local ABC affiliate reported on the story earlier this evening. You can watch the video above.

Let every heart prepare him room!