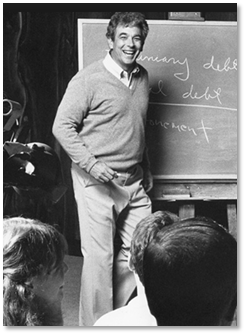 The news just went out that theologian R. C. Sproul has passed away. I cannot overstate what his influence has been over multiple generations of evangelicals. I was not personal friends with Dr. Sproul and never had the pleasure even to meet him (I am eager to hear the stories of those who did know him). Nevertheless, his ministry has had an enormous influence on me personally, not least because I discovered his ministry right when I needed it most.

I was in college in the mid-90’s when I first heard of R. C. Sproul. In those days, there was no “Young, Restless, and Reformed,” no Gospel Coalition, no T4G. But there was Sproul and Ligonier ministries. Dr. Sproul was reformed when reformed wasn’t cool—at least it wasn’t where I grew up in the deep south. Resources were limited in those days, and that is why Dr. Sproul’s ministry meant so much to me.

There are four signal moments that stand out to me from that time:

1. In college, the pastors at my church showed us some videos in which Dr. Sproul was teaching on the holiness of God. I later found out that the basis for these lectures was a book by the same name. I will never forget the massive vision of God and his holiness that he painted in those lectures—from Nadab and Abihu in Leviticus 10 to the doomed Uzzah in 2 Samuel 6—I saw God differently than I ever had before. God was more glorious and good than I had ever dared let myself imagine, and Dr. Sproul taught me that.

2. The first book I ever read by Dr. Sproul was his classic Chosen by God. I had been wrestling with the doctrines of grace during college, and this book set forth the biblical teaching in clear focus. This book meant so much to me as a college student. It was such a formative time in my life, and Sproul’s exposition was an enormous part of it. (Anyone else remember RULEP?)

3. The second book I ever read by Dr. Sproul was Faith Alone. This book was forged in the midst of the Evangelicals-Catholics Together controversy, and this book had a decisive, shaping influence on my understanding of the gospel. The reformation SOLAS became everything to me after reading that book, and I have never gotten over it. Justification is by grace alone through faith alone on the basis of the imputed righteousness of Christ alone. Hallelujah! It’s as true now as it ever was.

4. One final moment stands out to me. In the midst of the ECT controversy, Dr. Sproul went on the John Ankerberg Show with John MacArthur and D. James Kennedy. These three men were all opposed to ECT, but I will never forget the clarity and passion of Dr. Sproul in his portion of that discussion. I hung on his every word. I could hardly believe that someone could know so much precious truth and be able to express it like Dr. Sproul did. Last night, I discovered that the video is on YouTube, and you can watch it below.

I am so grateful for the life and ministry of Dr. R. C. Sproul, one of God’s choice servants. We will miss him. We already do.