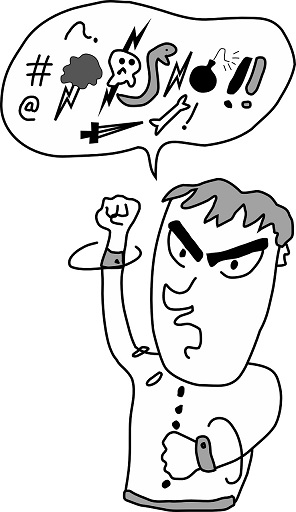 For some time now, I have had a growing pastoral concern about Christians using foul language. This concern has been driven in no small part by well-known pastors who commend the use of foul language and who do so based on foul language that they perceive to be in scripture. They acknowledge that the Bible says that we should not be using certain kinds of language: “Let there be no filthiness nor foolish talk nor crude joking, which are out of place, but instead let there be thanksgiving” (Eph. 5:4). But they also allege that the Bible itself elsewhere uses the very language that it prohibits in Ephesians 5:4.

While this would suggest that scripture contradicts itself, they argue that there is no contradiction. Rather, they contend that in some biblical contexts filthy language is bad but in other contexts it’s good. Our job is to carefully discern the difference by reading how the Bible uses filthy language for good ends and then to imitate that usage and to avoid filthy language otherwise. The pastoral upshot would seem to be this. Yes, it’s wrong to use filthy, obscene, vulgar speech when doing so for bad reasons, but totally fine to use such language in service of a good cause (like preaching or denouncing evil people). Therefore, we too can make use of words like the S-word, the F-word, the D-word, etc. Even though the Bible condemns such language (Eph. 5:4), the Bible also authorizes such language in certain circumstances.

That is why those who hold this view use words like “Bulls—“ in sermons or words like the C-word when denouncing a liberal female pastor. Obscenity in the service of “godly” ends is just fine. If you can’t accept that, then you are linguistically benighted and are judging on some Victorian standard but certainly not on any biblical standard. At least that is how I understand the argument. What are we to make of this?

In my view, the whole argument relies on a questionable foundation. The argument assumes that the Bible makes use of the very language that it prohibits, and it assumes that a variety of English “cuss” words are the dynamic equivalent of Biblical terms. But as far as I can tell, these are assumptions that they have only asserted but have never demonstrated. And there are obvious problems with each assumption.

First, there is very little evidence to support the notion that biblical expressions are the semantic equivalent of our modern “cuss” words. The cussing pastors point to Paul’s use of a term like skubalon (“dung”) in Philippians 3:8 or to explicit prophetic denouncements such as “rags of menstruation” in Isaiah 64:6. And yet, the lexica do not gloss these expressions with terms that provoke the kind of offense that cuss words evoke. Dan Wallace has an entire article on Paul’s use of skubalon in Philippians 3:8, and concludes that it should not be rendered with the S-word.

There’s no question that the prophets use language to shock their readers. It’s pretty clear that when they do so, they are often in a low register. But not all low-register, shocking language constitutes a vulgarity or an obscenity. Even explicit language like “you spread your feet to every passer-by” is different than “you [f-word] every passer-by” (Ezekiel 16:25). The biblical writers can and do use shocking language without violating Ephesians 5:4.

Second, despite protestations otherwise, Ephesians 5:4 is not attenuated. It is an absolute prohibition on filthy speech. And when read in context, it is easy to see that the injunction appears in a string of prohibitions that are not aphoristic but absolute:

Ephesians 5:3-5
3 But do not let immorality or any impurity or greed even be named among you, as is proper among saints; 4 and there must be no filthiness and silly talk, or coarse jesting, which are not fitting, but rather giving of thanks. 5 For this you know with certainty, that no immoral or impure person or covetous man, who is an idolater, has an inheritance in the kingdom of Christ and God.

If the preachers commending foul language are going to make the argument that “filthiness” and “coarse jesting” are sometimes allowed, wouldn’t they also have to conclude that immorality, impurity, greed, and idolatry are also allowed in some circumstances? Also, the “immoral or impure” person of verse 5 is the person who engages in the kind of speech from verse 4. This suggests that both (if unrepentant) do not have an inheritance in the Kingdom of God. In other words, the argument that says “sometimes this language is allowed, and sometimes it isn’t”—that argument doesn’t really hold water with the actual wording of the text. Anyone who argues that the apostles and prophets use the language prohibited in this verse cannot avoid the conclusion that Bible is contradicting itself.

I am not a big believer in “What would Jesus do?” speculations. I am much more interested in asking “What did Jesus do?” in his words and deeds recorded in Scripture. And we don’t have any examples of Jesus calling a woman something like the C-word because of her participation in immorality. Can you imagine Jesus calling the adulteress woman at the well the C-word? I can’t either. It’s not only absurd to ask the question, it’s offensive even to suggest such a thing. It is true that Jesus often used sharp, confrontational words, but that is not the same thing as using obscenities. But what about how he spoke of women who were on their way to judgment? Does he take the gloves off with them and cast obscene insults at them? No, even in prophetic denunciations the closest we get is a term like “Jezebel” (Rev. 2:20). But even here, this is certainly confrontational but hardly an obscenity like the C-word.

Let’s be fair. If we really want to account for all the words of Jesus, we can’t limit ourselves to the red letters. For after all, we know that all Scripture is coming to us from the “spirit of Christ” (2 Cor. 13:3; 1 Pet. 1:11). On this understanding of Scripture, the entire Bible should be printed in red letters, for all of it—from Genesis to Revelation—comes from the same Christ. If any part of Scripture commends filthy language, then we are faced with the same contradiction. Even when we consider how the Spirit of Christ spoke through the prophets of old, we find explicit language but not the equivalent of “cuss” words.

My bottom line pastoral concern is this. Shouldn’t all of us who preach the word endeavor to have pure, wholesome speech? Shouldn’t that be the kind of speech that we commend in our sermons and public teaching? Shouldn’t we aspire to be like Jesus, about whom it was said “All spoke well of him and marveled at the gracious words that were falling from his lips” (Luke 4:22)? The idea that we need to disciple God’s people in the proper use of profanity seems not only a fool’s errand but also a serious biblical error. For this reason, we would do well to teach God’s people not to loosen their expressions but to restrain them (Prov. 10:19).

God Is the Sovereign Designer of Sex