National Geographic has released a special issue titled “Gender Revolution,” and it includes one article offering advice for parents of transgender children. Here is the bottom line:

Your most important role as a parent is to offer understanding, respect, and support to your child. A nonjudgmental approach will gain your child’s trust and put you in a better position to help your child through difficult times.

When your child discloses an identity to you, respond in an affirming, supportive way…

In short, parents must affirm whatever identity a child embraces or risk “harming” their child. But there are some obvious questions that never get asked and answered in this article. Are children really helped when parents decline to make judgments about what is best for their child? Must parents accept and affirm any identity that a child might assume? What kind of child-rearing strategy is it that disallows moral discernment and mandates unconditional affirmation?

Perhaps a little thought experiment might help to illustrate the point. Let us consider if nonjudgmental affirmation really is a principle that can be relied upon in rearing children who assume an identity. Consider the example of Herbert Chavez (see video above), who from the time he was a small child became obsessed with assuming the identity of Superman. Early on, this obsession involved costumes and make-up. As an adult, it included plastic surgery and cosmetic procedures to shape his face and body to look like Christopher Reeve’s Superman. He even gave himself illegal injections in his abdomen to give himself a “six pack.” When asked why he chose injections over exercise, he said it was because he liked chocolate ice cream too much. Why does he do this? He claims that he wants to be an inspiration to kids.

I encourage you to watch the video above and to read the articles about Chavez (here and here). Keep in mind that Chavez’s obsession began as a child and extended into adulthood. Is “nonjudgmental affirmation” of his Superman identity what Chavez really needs? Is “nonjudgmental affirmation” what Chavez needed as a child when this obsession began? Don’t these questions answer themselves? I would argue that what Chavez needs now and what he needed then is someone who loves him enough to make moral judgments and to tell him the truth. The identity he has assumed is a total fiction. He is not Superman, and no matter how many surgeries he has he will never be Superman. No amount of self-mutilation can change that.

If that is the case with a child who has assumed a superhero’s identity, why would it be any different with a child who assumes a gender identity at odds with his bodily reality? In other words, if “nonjudgmental affirmation” fails for fictional superhero identities, why should we expect it to do any better for fictional gender identities? That is why I don’t think it radical to suggest that “nonjudgmental affirmation” is hardly a sound principle for child-rearing. Children need their parents to make sound moral judgments for them and to lead them and shape them accordingly. Parents who passively affirm any and every “identity” a child might assume are not helping them but harming them. For National Geographic to suggest otherwise is discrediting. 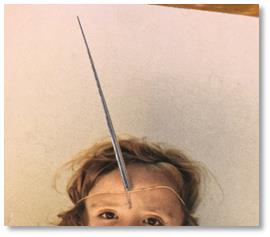 I can imagine someone objecting, “We’re not talking about affirming all identities, just gender and sexual identities.” But we are not told why gender and sexual identities are to be treated differently from other kinds of fictional identities. Furthermore, National Geographic is not so circumspect as this objection might suggest. One of the children profiled later in the issue identifies as both boy and girl and as a unicorn. There is a picture of the confused child with a horn strapped to his head (p. 61). In other words, this child’s unicorn identity is set right alongside his gender identity as if they were equally valid identities. Only the most hopeless ideologue would fail to see the absurdity of this, right? It is hard to tell these days. The absurdity seems to be lost on the editors at National Geographic, and no doubt it will be lost on many readers as well.

But this is precisely where Christianity sheds light on the human condition in a way that is helpful and not harmful. The biblical doctrine of the fall teaches us that our inner feelings (gender, sexual, or otherwise) are corrupted by sin. Thus, we cannot simply assume that what feels natural must be right or “expressed” in behavior. Sometimes our hearts deceive us, and what feels good and right is often not in fact good and right. Proverbs 28:26 warns, “He who trusts in his own heart is a fool, But he who walks wisely will be delivered.” This means that we are rightly suspicious of our own hearts and what “naturally” flows out of them. We have to evaluate all feelings and intuitions by scriptural revelation to discern what is good and right and true.

Likewise, parents have to do the same for children who are confused about these things. “Nonjudgmental affirmation” will not yield wisdom and life for children. But righteous discernment and loving guidance will. And contrary to National Geographic, this is what parents need to apply themselves to in raising their children.