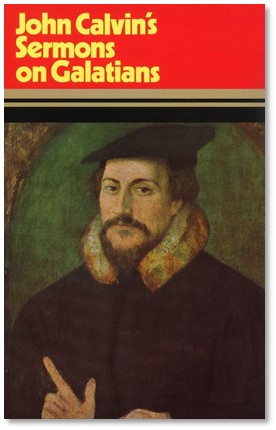 Over the summer, Rosaria Butterfield and I coauthored an article about the differences between Protestants and Catholics concerning original sin. I followed up that article with some of my own reflections about temptation and sin. I stand by what we wrote. I have many Roman Catholic friends that I love and appreciate, but I still think that our differences on this point are important to come to terms with.

John Calvin opines on these differences as well in a sermon on Galatians 5:19-23. Calvin’s comments reveal that our differences with Roman Catholics about original sin are as old as the Reformation. The sermon also reveals that the debate was not and is not still merely academic. It has tremendous practical implications for how we are to live our lives as pleasing before God. The rhetoric here is strong and reflects the pitched conflict of the time. Nevertheless, the underlying theological point still stands. Here is Calvin in his own words:

The Popish doctors display their excessive stupidity by saying that it is not a sin to think evil, or to be tempted, as long as one does not consent to do it. A man could be tempted to wrong his neighbour in some way; he may have a grievance or frustration which makes him want to avenge himself upon the person who has offended him. If the occasion were to arise, he would be delighted. This is not sin, they tell us, unless he has consented to the temptation with resolve. They are only wiping their mouths like whores, or showing their snouts like sows, after they have wallowed in the mire and dirt. A man may murmur against God and be angry with him, and doubt whether God will look after him; he may be troubled by many mistrustful thoughts, so that he cannot find refuge in God; but none of these things are sin according to the Papists. I am not saying that the common herd are the only ones to be deceived in these matters, for all of their schools hold to the doctrine and belief that this is not sin. They do say that all is sin before baptism; but after baptism, all becomes virtuous, however much we may doubt God, or however many grievances we have against him. We may be very impatient with him, or agitated about this matter or that — but we cannot be accused if we have not been moved to practise evil outwardly! In short, if we are inclined to all that God condemns and reproves in his law — all that is unlawful — it is nothing. They are well suited to believe such stupid things! After all, they have made idols and grotesque statues to worship, and now their minds have become darkened as they make merry around their gods, scoffing at us, as at a little child holding forth about righteousness and integrity. We must not, therefore, be surprised if such people behave like this. Because they have falsified the glory of God and destroyed it, they must be completely brutish.

As for us, let us note the words which I have already quoted from the apostle Paul, namely, that the law is spiritual. If we are convicted as rebels against God because of external, visible acts, let us remember that God will find an infinite number, indeed, an abyss of evil desires writhing inside of us, though they are not regarded by men as rendering us guilty. We must, therefore, conclude that in everything and in every way we are drowned in perdition, until God looks in pity upon us, and draws us out. The way to apply this text of Paul’s to our instruction is as follows: inasmuch as we are unaware of the sins that lurk within us, it is necessary for God to come and examine our lives. After this, we will learn to humble ourselves. So then, once we see the sins that are known and evident to all, and which cannot be excused, even in the eyes of little children, may we be led even further to sound out the depths, and acknowledge that all our appetites and thoughts are like many rebellions against God. Yet if each of us were more careful to examine ourselves in this way, we would all surely have occasion to tremble and sigh; all haughtiness and pride would be cast down and we would be ashamed of every aspect of our lives. But we know that each of us turns away as much as we can from any knowledge of our sins; we throw them all behind our backs. God does not forget them; though we may want them to be forgotten, he has to keep them in remembrance. This is what Paul attracts our attention to in this passage.