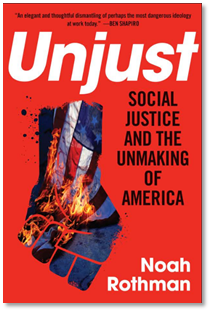 I want to post a brief note about Noah Rothman’s new book on social justice titled Unjust: Social Justice and the Unmaking of America (Regnery, 2019). I just finished it a couple days ago and found much that is helpful in it. Rothman outlines a brief history of social justice movements and argues that its current incarnation has collapsed into identity politics. In short, social justice is not about notions of individual liberty and justice but about righting historical wrongs committed against various identity groups.

Rothman is not denying that certain groups have experienced injustice. On the contrary, he argues that certain classes of people have in fact experienced historic oppression and that their plight demands justice. His contention, however, is that so-called “social justice” has devolved into recriminations between identitarian movements on both the right and the left. He criticizes both sides of this conflict as extreme and poisonous to our common culture.

Nevertheless, Rothman’s focus in this particular book is the identitarian movement of the left called social justice. Here is Rothman in his own words:

The American tradition of political idealism is imperiled by a growing obsession with the demographic categories of race, sex, ethnicity, and sexual orientation—the primary categories that are now supposed to constitute “identity.” As groups defined by these various categories have come to command the comprehensive allegiance of their members, identity alone has become a powerful political program. As it turns out, it is not a program that appeals to the better angels of our nature.

Identity has always been a part of our political culture, but lately the practitioners of identity politics have been less interested in continuity and legitimacy than in revenge. This retribution is antithetical to the conciliatory ideals by which injustices perpetrated in the name of identity were once reconciled. The authors of this vengeance reject the kind of blind, objective justice toward which Western civilization has striven since the Enlightenment. They argue, in fact, that blind justice is not justice at all. Objectivity is a utopian goal, a myth clung to by naïve children. We are all products of our experiences and the conditions into which we were born, whether we like it or not. Those traits set us on a course that is in many ways predestined.

The identity-obsessed left believes that Americans who are born into “privileged” demographic categories—male, white, and heterosexual, among others—will have an easier time navigating life than their underprivileged counterparts, among them women, ethnic minorities, and the LGBT. Those on the right believe the opposite is true: the historically marginalized have had the scales tipped in their direction. The so-called “privileged” majority not only has lost its privileges but is often stripped of its essential rights.

The paranoia which can ensue from this division is the venomous progeny of identity politics. Its practitioners call it social justice.

This idea of social justice has developed into a way of life. The study of identity long ago ceased to resemble an academic discipline. Its tenets are as inviolable as any religious dogma. [pages xii-xiii]

Rothman contends that social justice practitioners have left behind a liberal ideal of justice for the illiberal ideal of retributive and distributive justice. Retributive justice involves punitive social action against historically privileged groups while distributive justice requires redistribution of goods and capital to historically oppressed groups. This kind of justice foments division and hostility which in turn unravel the social fabric of the nation. In short, Rothman believes that the current incarnation of social justice is going to be the undoing of America unless its illiberal tendencies can be reversed.

I do not intend this to be a full review and have only given the briefest sketch of Rothman’s work. Nevertheless, Rothman has evinced a provocative thesis that I think deserves a wide hearing.