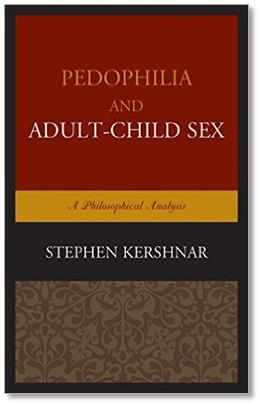 I have written in this space before about the idea that pedophilia is a sexual orientation, that it’s just another element of human sexual diversity not to be condemned but understood and sympathized with. We are now at the next stage of normalization. Indeed, the DSM-V already recognizes pedophilia as a sexual orientation (p. 698). But now we have a full-length academic book arguing the same: Pedophilia and Adult-Child Sex: A Philosophical Analysis, by Stephen Kershnar.

In this book, Kershnar questions whether pedophilia should be considered a mental disorder and/or morally wrong. His argument is that it can only be considered a mental disorder if and only if two conditions are met: (1) if the condition causes harm and (2) if the harm results from a dysfunction in a mental mechanism. Kershnar contends that pedophilia is a “natural function” with an “evolutionary explanation.” Thus it does not meet the second criterion. He further argues that pedophilia doesn’t harm the pedophile and that it does not necessarily harm a “willing” child. So pedophilia doesn’t clearly violate the first criterion either (pp. xviii-xix).

If you think it sounds outlandish that pedophilia might be normalized in this way, you wouldn’t be alone. Most people feel moral revulsion at the prospect of such a thing. But this book appears to be questioning the “ick factor” associated with pedophilia. Is the “ick factor” just an aesthetic preference or an intuition about a moral absolute? If it’s just an aesthetic preference, then it can’t always in every case be wrong. At least that’s the logic. The author writes:

My analysis simply provides reason to reject the general condemnation of adult-child sex… It also allows that some adult-child sex, perhaps even some in the real world, is not wrong and does not involve vicious or blameworthy adults (p. xix).

I saw this book noted by Princeton law professor Robbie George, who had this to say about the book on his Facebook page:

An academic philosophical defense of “adult-child sex” invoking standard liberal assumptions and principles. We’re now on that familiar highway going from “the conservatives are scaremongering” to “there’s nothing wrong with that, so live and let live” to “you’re a bigot for not approving.” Let’s revisit this in 3-5 years to see where we are.

Some might wish to dismiss Dr. George’s concerns as alarmist. But are they really? It seems that the moral argument is pretty straightforward and inevitable given what most people already believe about sexual orientation.

It is common today to believe that sexual orientation is an innate quality and defines a person’s identity. To suppress that identity in any way causes harm. We must affirm people’s self-identity (i.e., sexual orientation) in order for them to be whole and healthy. As long as they aren’t hurting anyone, it is wrong to pronounce a moral judgment on how they choose to live their identity. Or at least that’s how the argument commonly goes. It is a truncated morality in which the only norm is consent.

Pedophilia as orientation exposes the inadequacy of this kind of moral reasoning. It shows that you cannot give a moral assessment of sexual behavior merely on the basis of the actor’s perceived orientation. Sexual attractions can be misdirected and wrong. But the wrongness of the attractions cannot be determined simply by whether or not they come naturally to a person. There are many patterns of sexual attraction that feel natural to people but that are nevertheless morally wrong. The moral assessment of both orientation and the behavior that comes from it must be made on other grounds.

As a Christian, I would argue that those “other grounds” are a matter of revelation. God has revealed his intention for us as sexual beings both in natural and special revelation. Natural revelation tells us that male and female bodies have sexual complementarity ordered to the procreation of the human race. Special revelation instructs us that conjugal union is only to be enjoyed between one man and one woman within the covenant of marriage. Any sexual activity that does not conform to this pattern falls short of God’s intention—which is another way of saying that it is morally wrong.

Because mankind and the world are fallen (Genesis 3), we often find ourselves at odds with God’s intention for our sexual lives. Because of our deep connection to our father Adam, it is possible for our sexual incongruity to feel quite natural to us. But the incongruity is not rendered congruous simply because it feels “natural.” Natural is defined by God’s revelation, not by our feelings one way or the other.

So Christianity provides a limiting factor that stops the normalization of pedophilia in its tracks. I don’t think the spirit of our age can provide the same.