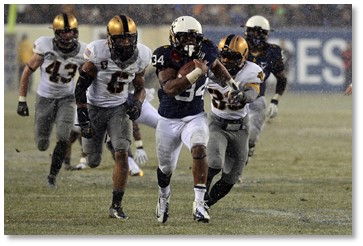 Clay Travis reports that TV networks are set to lose about $500 million dollars due to ratings decline in their NFL coverage. NFL viewership is down about 20% from two years ago. Many observers are blaming the decline entirely on the protests. Other observers say that the protests are just one piece of a larger picture.

Travis argues that there are four reasons for the decline: (1) kick-off times no longer concentrated on Sundays, (2) poor quarterback play, (3) the addition of two teams to Los Angeles, and (4) the protests. I highlight Travis’s article not because I wish to weigh-in on the debate about the decline in NFL viewership. I cite his article because of what he says about number two—poor quarterback play.

Travis argues that CTE is going to change the future of the quarterback position in the NFL and thus the overall quality of play. He writes:

I think the biggest threat to the NFL’s product right now is the lack of quality quarterbacks. The scary thing for the NFL? I don’t see that improving because with the CTE issues now becoming a major point of discussion across the country there are going to be fewer and fewer kids playing football. You know most parents won’t let their children box now because we know what it does to a person’s brain, what if the same thing happens with football?

You might think the declining numbers of kids playing football won’t impact things very much, but it’s important to contemplate the position that will be most impacted by this decision.

I think CTE is likely to decimate the quarterback position in football.

That’s because quarterbacks tend to come from two parent, middle class households and the players would probably go to college even if they didn’t play football. Playing quarterback is expensive, you have to go to exclusive camps now to refine your craft and become elite.

The parents of quarterbacks are the most likely parents to pull their sons from football.

Not that I know of.

That means football is something that they are choosing to do as part of many other potential activities, sports and otherwise. Football isn’t their way out of poverty, it’s just a sport they start playing and happen to be good at. Odds are most top quarterbacks in the NFL could have also been pretty good at baseball, basketball, soccer, hockey, tennis or lacrosse if they’d played those sports instead.

What would happen if you took the top ten quarterbacks and removed them from the NFL? The league would be virtually unwatchable, right?

In the next decade will the Manning brothers, the Brady’s and Brees’s, the Cam Newton’s, Matt Ryan’s and Russell Wilson’s of the world play football? I doubt their parents will let them.

If that happens, the NFL’s bad play is going to get worse and worse in the years ahead.

Whether Travis is right about the ratings decline, I can’t say. But anecdotally, I think I can confirm what he is saying about CTE. Parents are becoming more and more aware of safety issues in football—in ways that no one was concerned about back in the olden days when I played in high school.

The trend seems to be that the more engaged parents are with their children, the more reluctant they are about football. Obviously, that is not universally the case, but it does seem to be happening in some measure. Such a trend will have inevitable consequences for the NFL in the long term, and those consequences may already be occurring.

I’m curious if readers are seeing the same thing I’m seeing. Are you reluctant to let your sons play football? Why or why not? Weigh-in on the conversation here.

How CTE may be affecting decline in NFL viewership. https://t.co/zUaqZrYQPL