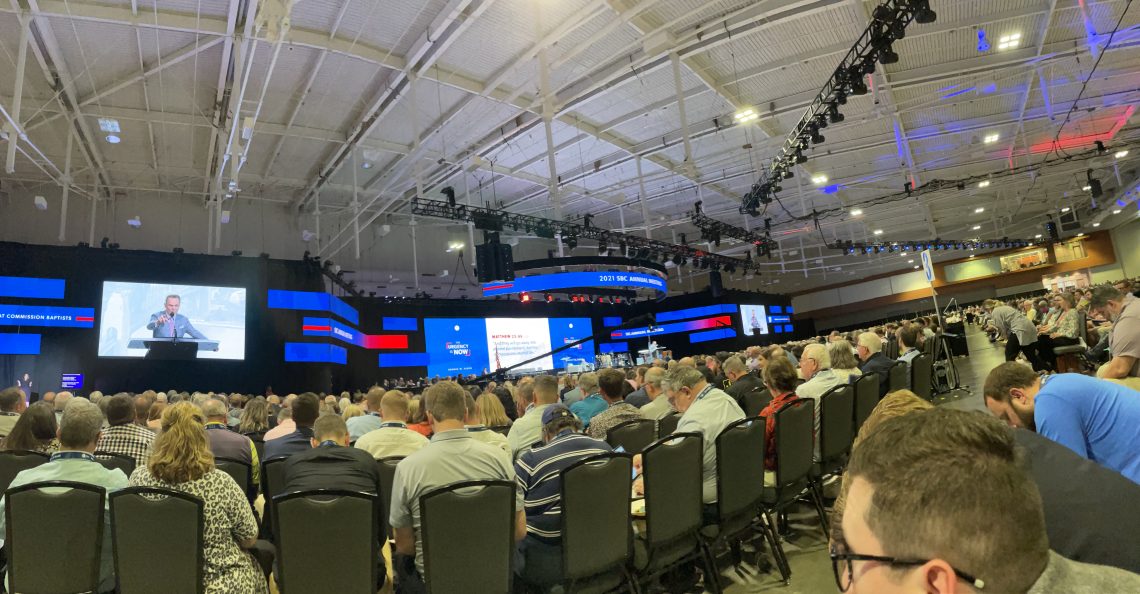 Last month, I made a prediction that we wouldn’t leave the SBC in Nashville without a resolution making it absolutely clear how Southern Baptists feel about CRT. How has that prediction turned out? It’s hard to say now because we still have more to debate and discuss tomorrow.

Most notably, the Committee on Order of Business will report tomorrow on a motion to rescind Resolution 9 passed at 2019 SBC. If we are able to vote on that motion and rescind, it would serve the same purpose as a strong resolution. I suspect, however, that the motion will be ruled out of order and that we will not have the opportunity to debate it.

In any case, as I have observed the room over the last day, it doesn’t seem like the messengers came this year to talk about CRT. As CRT was mentioned in motions and other items of business during the day, there didn’t seem to be a groundswell to address it—at least not explicitly.

The messengers did, however, overwhelmingly approve Resolution 2, which says,

RESOLVED, That we reject any theory or worldview that finds the ultimate identity of human beings in ethnicity or in any other group dynamic; and be it further

RESOLVED, We, therefore, reject any theory or worldview that denies that racism, oppression, or discrimination is rooted, ultimately, in anything other than sin; and be it further

These statements are all to the good, and the rejection they enjoin certainly applies to CRT. The only drawback is that this resolution doesn’t mention CRT explicitly (even though the resolutions that Southern Baptists offered did mention it explicitly). That doesn’t mean that Resolution 2 says something wrong. I think its assertions are fine, and I voted for it. Nevertheless it does omit explicit mention of the one item that was explicitly mentioned in the proposed resolutions—CRT.

I would have supported an effort either to strengthen Resolution 2 from the floor or an effort to vote one of the other resolutions out of committee to be considered directly by messengers. But neither one of those options were forthcoming. I’m not sure that messengers would have voted for them even if they had been.

Bottom Line: We did not get a resolution explicitly denouncing CRT, but we did get one that applies to CRT.

Does this imply that Southern Baptists are soft on CRT? I don’t think so. I do think it suggests that many Southern Baptists still aren’t sure what CRT is and therefore do not see any urgency to address it. But as the culture becomes more saturated with this ideology and its practical implications, I suspect that Southern Baptist awareness will increase and their resolve to do something about it will eventually have to be heard.