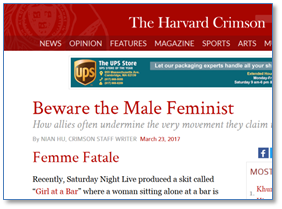 I mentioned a few weeks ago, that I’ve been doing some reading on intersectionality and identity politics. One item that I have observed in this reading is the tendency among some to assign moral guilt based not on moral action but based on identity.

A few weeks ago, I came across a column in the Harvard Crimson that illustrates the point. In this column, Nian Hu is warning women to “Beware of the Male Feminist.” She writes:

What these male feminists fail to realize is that, as men, they will always be oppressors. No matter how many feminist marches they attend or how much feminist literature they read, they are not exempt from perpetuating the subordination of women. Their support of the women’s movement does not erase the fact that they, on an individual level, are capable of harassing, assaulting, or silencing women—nor that, on a structural level, they continue to benefit from a system that establishes male dominance at the expense of women. And even though male allies may genuinely feel guilty, they will continue to benefit from male privilege. The patriarchy does not offer special exceptions for men with good intentions. Men, as a class, are culpable for misogyny, and male allies are no different and no less capable of demeaning women through their words, actions, and complicit silence.

Notice what she argues here. One does not have to commit an act of oppression to be guilty of oppression. One merely has to be “capable of harassing, assaulting, or silencing women.” Just by virtue of being male, therefore, every man is guilty. And no amount of feminist allyship or “good intentions” can erase the stain of his guilt. “Men, as a class, are culpable for misogyny.”

As I have been reading through some of this material, I’ve become more and more convinced that Christians are going to have to think carefully about some key concepts that are driving articles like the one above. We are going to have to think carefully and biblically about identity, privilege, allyship, intersectionality, and a host of other related topics that are driving the conversation in the culture today.

To that end, Jonathan Leeman has a really helpful post over at The Gospel Coalition helping us to think through the issue of privilege: “Identity Politics, White Privilege, and Gospel Peace.” Jonathan is thinking through the privilege motif vis a vis racial inequalities, but the larger point that he’s making about guilt and privilege would apply to any social identity, including the ones implicated in the article above from The Harvard Crimson. Jonathan writes:

In the American context, the phrase “white privilege” refers to the structural injustices affixed to ethnicity and skin color.

More specifically, white privilege can mean at least three things, two of which I accept and one of which I don’t. First, it means that I possess, by virtue of my skin color, social and material advantages. This is simply a statistical reality…

White privilege means, second of all, that I possess those advantages by virtue of systemic and historic patterns of discrimination and injustice… I accept this second plank of white privilege as well…

But there is a third, more profoundly ideological and typically unstated meaning of white privilege that I do not accept. And that is the automatic transfer of guilt to anyone who possesses such advantages… As author Eula Biss put it, whiteness is not an identity but a moral problem. Whites are moral debtors simply by being white. If a black 4-year-old is demonstrably indicted as guilty by the structures of society, says Ta-Nehsi Coates following Malcolm X, then “it is impossible for white 4-year-olds to be innocent.”…

The bottom line here is: Identity politics, at its most careless, undermines moral agency. The white 16-year-old at Northeast High is not guilty simply for being white or for the advantages he possesses by virtue of his skin color. We cannot forsake the demands of justice at an individual level. We understand from Scripture that guilt and culpability are individual; punishment and responsibility are individual. To say otherwise is its own kind of Nietzschian power move—creating a concept of guilt for the sake of leveraging power.

This excerpt doesn’t do the full argument justice, so you really have to go read the whole thing. I think Jonathan is spot-on here. There is no question that privilege exists in the first two senses of the term, but the third sense is problematic. If privilege implies guilt, then it is possible to be guilty of a sin that you didn’t commit and for which there can be no atonement. Moreover, there would be no possibility of reconciliation on an individual level as long as systemic injustices persist in the world.

Obviously, these conclusions are squarely at odds with biblical teaching about guilt, justice, and reconciliation with God and with one another. And that is why we are going to have to give careful attention to the claims being made by proponents of identity politics. Their claims are theological at their core, and they require a theological answer. Jonathan gets us started in the right direction, and I encourage you to read the rest of his piece here.