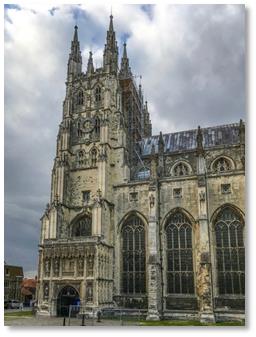 I am not surprised that Welby fails to defend what the Bible teaches about sexuality. I am surprised that he is so honest as to why he won’t give a straight answer. Welby admits that his obfuscation is essentially political. Here’s an excerpt:

Because I feel sorry for Tim Farron, who kept being asked this question, so I am asking you.

You know very well that is a question I can’t give a straight answer to. Sorry, badly phrased there. I should have thought that one through. [Pause, mildly embarrassed.]

But that could be a man and a man or a woman and a woman?

I know it could be. I am also aware – a view deeply held by tradition since long before Christianity, within the Jewish tradition – that marriage is understood invariably as being between a man and a woman. Or, in various times, a man and several women, if you go back to the Old Testament. I know that the Church around the world is deeply divided on this in some places, including the Anglicans and other Churches, not just us, and we are – the vast majority of the Church is – deeply against gay sex.

So this is where you are having to be a politician.

Yes. I am having to struggle to be faithful to the tradition, faithful to the scripture, to understand what the call and will of God is in the 21st century and to respond appropriately with an answer for all people – not condemning them, whether I agree with them or not – that covers both sides of the argument. And I haven’t got a good answer, and I am not doing that bit of work as well as I would like.

But is that because the politics are so hard, you have these Ugandan bishops and the liberals who believe something very different and you have to try to reconcile them?

So is homophobic hatred sinful?

Yes. Because you are hating individuals. I don’t think it is sinful to say that you disagree with gay sex. But to express that by way of hatred for people is absolutely wrong in the same way as misogyny or racism is wrong.

Is that not morally a cop out?

Yes. I am copping out because I am struggling with the issue.

These statements from Welby are so morally confused. One thing, however, is very clear. Welby is unwilling to defend the teaching of scripture and of the 2,000-year consensus of the Christian church. Instead, he feels it his duty as the archbishop to cover “both sides of the argument” and offend no one—to tell them whatever their itching ears want to hear (2 Tim. 2:3).

How far this is from the New Testament’s vision of pastoral leadership. That vision involves integrity of conviction and the willingness to contend for the truth in the face of opposition.

Titus 1:9 “He must hold firmly to the trustworthy message as it has been taught, so that he can encourage others by sound doctrine and refute those who oppose it.”

2 Timothy 2:24-26 “And the Lord’s bond-servant must not be quarrelsome, but be kind to all, able to teach, patient when wronged, with gentleness correcting those who are in opposition, if perhaps God may grant them repentance leading to the knowledge of the truth, and they may come to their senses and escape from the snare of the devil, having been held captive by him to do his will.”

These are basic pastoral duties, but they are altogether missing in Welby’s response. Any pastor unwilling to take up these duties is not qualified for the office they hold, and it is great tragedy when they do hold it.