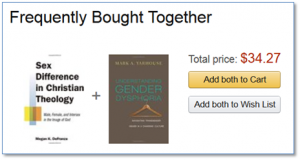 has published an interview that evangelicals would do well to take note of. In this piece for Religion News Service, Merritt talks to Mark Yarhouse and Megan DeFranza about their new books dealing with transgender and intersex respectively. Why is this interview important?

The interview highlights two books that represent a massive revision of biblical anthropology. I finished reading Yarhouse’s book about a month ago, and I am reading DeFranza’s book now. And their revisions are not benign. They represent a theological earthquake that for some reason has yet to register on the evangelical Richter Scale. The ideas aren’t new, but I think their mainstreaming within the evangelical movement is. What is the earthquake?

These two books are laying the groundwork for evangelicals to abandon the male/female binary that is taught in scripture. Defranza’s book challenges the idea that Genesis 1 defines a binary norm for human beings—that God’s creation of “male and female” is God’s paradigm for humanity. Yarhouse’s book is challenging the notion that male/female biological differences define normative role distinctions between men and women.

There is much more to their arguments than this, and I hope to review these books in greater detail in the very near future. But for now, I just want to highlight that this interview distills some of the observations that I have made in reading their actual books. Yarhouse, for instance, does not rule out sex-reassignment surgery as one way for transgender persons to manage their gender dysphoria. Yarhouse prefers less “invasive” management strategies like cross-dressing or wearing the underwear of the opposite sex, but he nevertheless finds no theological grounds for ruling out sex-reassignment surgery.

Most evangelicals will recognize this as a massive anthropological revision that deserves a serious response. But somehow, it has not been received that way. Earlier this year, a reviewer at The Gospel Coalition said that Yarhouse’s book “marks a step forward in Christian engagement with gender issues.” I couldn’t disagree more.

The great theological challenge facing the church today is anthropological, and the challenge is a direct consequence of late modernity in the aftermath of the sexual revolution. Basic ideas about what it means to be created in the image of God as male and female are now up for grabs. And what is perhaps most surprising about this development is the fact that evangelicals seem to have been caught flat-footed—so much so that these two books have barely registered a blip on the evangelical radar screen. I think that is about to change.