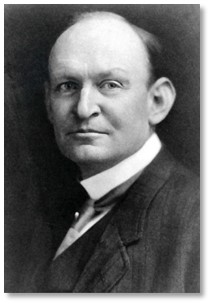 A. T. Robertson is without question the greatest scholar of New Testament Greek that the Southern Baptist Convention has ever produced. Indeed, he is one of the greatest scholars of New Testament Greek that has ever lived. In 1906, Robertson wrote a sharp critique of the practice of women preaching in “mixed public assemblies.” His brief remarks appear in the introduction to W. P. Harvey’s booklet Shall Women Preach (Louisville, KY: Baptist Book Concern, 1906). I recently came across this short essay and thought it worth highlighting here. See below.

The gravity of the question of women’s speaking in mixed public assemblies is sufficient apology for the appearance of this pamphlet, by the Rev. W. P. Harvey, D.D. It is justice to say that it has met with the warmest reception wherever it has been delivered. The persistent and aggressive attacks which the advocates of the practice make upon the Bible render every defence of Scriptural authority welcome. Dr. Broadus’ tract on this subject has a wide and growing circulation and should be read by many thousands more. Dr. Hawthorne’s sermon should exert a widespread influence and check the encroachments of this tendency among Baptist churches. The paper of Bro. Harvey has the merit of directness and clearness and handles the subject vigorously. It is none too soon that decided words should be spoken on this line. Baptists are the last people in the world to speak slightingly of the authority of the New Testament on anything or to resort to doubtful and equivocal arguments to defend practices in opposition to the plain meaning of Scripture. This appeal to the Bible has been our boast. With regret be it said that many of the arguments adduced for the defence of “testifying” and public speaking on the part of women in our religious meetings flavor strongly of the dodges and turns made by some good people to evade the plain meaning of the Scriptures as to baptism. One brother recently argued that as “there is no male and female” in Christ, women had as much right to speak as men. He simply ignored the fact that Paul here (Gal. 3:28) is talking about salvation and not preaching. Salvation is free to all without distinction of race, sex, or condition. See what a jumble he made here. Another brother said that he did not care if Paul did forbid women’s speaking, for he was an old bachelor anyhow and not in sympathy with women and that at his Association the best speeches were made by the women. See what flippant irreverence and painful effort to justify a violation of Scripture by the success of the violation! Is success a criterion of right? All kinds of sin are successful, alas! Will the Bible retain its hold upon the hearts and consciences of the churches, if once we begin such light handling of its authority? To say the very least, it is not Baptistic to distort the Bible into justification of any practice. Our glory has been that we twisted our behavior, when it needed it, into conformity with the New Testament. We have always been willing to meet the Bible with open face and heart ready to obey its clear teaching. Let us do so here. The women, as a rule, do not desire this innovation. It is pressed by some freethinking women and sustained by some preachers who imagine they see here a great lever for usefulness. Be it remembered that the power behind every spiritual lever is the Holy Spirit. He will not bless known disobedience to his will. There may come curiosity and revival of interest by such novel means, but loyalty to Scriptural truth and authority is a higher consideration than momentary and sensational excitement.