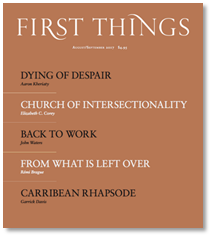 Elizabeth Corey’s recent article in First Things may be the best short intro to intersectionality that I have yet come across. I highly recommend that you read it if you have not already. I would like to highlight a couple items from Corey’s observations that relate to my growing concerns with this philosophy of human identity—indeed, two areas where this ideology seems to be at odds with the Christian gospel.

Before doing that, I should stipulate up front that I do not disagree with every aspect of the theory. As Joe Carter has pointed out, intersectionality can help us to understand how an individual may experience multiple layers of discrimination or mistreatment. From a Christian perspective, this insight can perhaps serve as one metric for understanding how sin operates in a fallen world. This rightly evokes our compassion and resolve for justice. Nevertheless, I do not see why we need the total theory in order to maintain that particular insight, and I can think of a number of reasons that Christians might want to unload the theory. At least two of those reasons appear in Corey’s essay.

Corey observes a deficiency in intersectionality theory that goes to the very foundation:

Intersectional theorists begin their work on the basis of a debatable (though never debated) set of characteristics that supposedly constitute personal identity: race, gender, class, sexual orientation, ethnicity, and sometimes others (weight, attractiveness, age). Women are collectively, and as individuals, oppressed. So are gays, lesbians, Hispanics, blacks, the disabled, the aged, the very young, the obese, the transgender—and the list goes on, becoming more complex with the addition and subtraction of multiple traits.

Intersectionality fails to distinguish between social categories that are morally neutral and those that are morally implicated. For example, race and gender are set right alongside sexual orientation. This is a big problem. Whereas the Bible celebrates racial diversity and the complementary differences between male and female, it does not celebrate sexual orientation diversity. The Bible says that all sexual activity outside the covenant of marriage is sinful, but intersectional activists would view such a judgment as oppression when applied to gay or bisexual people. Intersectionality insists that homosexuality is a good to be celebrated and promoted. Likewise, intersectionality defines gender in a way that mandates the celebration of transgender identities. This too is a radical departure from Christian teaching about how integral biological sex is to human identity as male and female. In these ways, intersectionality is at odds with fundamental truths of Christianity.

Reason 2: Intersectionality exacerbates social divisions rather than healing them

It has often been observed that intersectionality creates a kind of “oppression Olympics” among those who hold the theory. Ironically, within college campus subculture, one’s moral authority can be enhanced by intersecting identities of oppression. This kind of a social dynamic incentivizes grievance based on identity. In that way, it entrenches social divisions rather than healing them.

Indeed, Corey talks about one theorist who insists that there can be no peace between intersectionality and those who refuse to recognize the validity of the theory:

At the end there was a question and answer period. I asked whether and how Collins would suggest that intersectionality engage with its adversaries, the hated conservatives. Given the polarization of America right now, did she see some way for the two camps to communicate or find common ground? The vehemence of her answer was startling. “No,” she said. “You cannot bring these two worlds together. You must be oppositional. You must fight. For me, it’s a line in the sand.” This was at once jarring and clarifying.

To refuse to recognize intersectionality is not merely a theoretical dispute. It reveals animus toward those whose identities must be recognized and celebrated. Such refusal is the opposite of “safe space” and must be vigorously opposed.

All of this makes for a cauldron of division. Intersectionality may be good at pointing out what divides us, but it is horrible at bringing remedy to those divisions. No amount of “allyship” ever really rights the ship. Identity grievance endures no matter how many allies come onto the scene.

The gospel on the other hand is providing an entirely different remedy. Where the gospel prevails, reconciliation between between social groups also prevails. That is what Galatians 3:27-28 is all about:

The gospel removes hostilities between social groups. It doesn’t foster them. Also, the gospel doesn’t celebrate social identities that are defined by human fallenness and sin (e.g., homosexuality, transgenderism). If the Bible is true, then these identities can only be understood as features of the sinful nature which the gospel means to obliterate and to transform into the image of Christ (2 Cor. 3:18).

The church is supposed to be a counterculture of gospel unity which bears witness to a world that is divided by countless hostilities. Intersectionality seems to incentivize those hostilities, whereas the gospel overcomes them.

What Happened at the Rocky Mountain ETS?