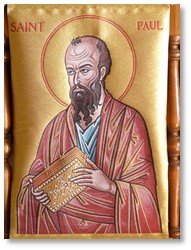 In my sermon this morning at Kenwood Baptist Church, I made the case that the Apostle Paul was not always single but was once married. This observation emerges from Paul’s words in 1 Corinthians 7:8-9. You can download the full sermon here or listen below.

–
Here’s how we know that Paul was once married. Paul writes:

8 To the unmarried and the widows I say that it is good for them to remain single, as I am.

If we want to understand how this verse applies to us, we need first of all to whom it is addressed. Your English versions say that Paul addresses “the unmarried and the widows.” It’s clear what Paul means by “widows.” He’s referring to any woman who was once married but whose husband has died. But to whom is Paul referring when he says “the unmarried”?

Some readers interpret the “unmarried” generically as anyone who happens to be unmarried regardless of how they got into that situation (e.g., Ciampa and Rosner). For this reason, they think that the “unmarried” would include both the widowed, the divorced, and those who have never been married. On this view, Paul means to address all Christians who happen to be unmarried.

I think this interpretation is mistaken. It may be that Paul’s words have implications for all who are unmarried, but I think Paul’s reference to the unmarried refers to widowers specifically. There are a number of reasons for this. Not the least of which is the fact that the Greek word for “widower” was rarely used in ancient Greek and was never used in the Koine period (Fee).

For some reason, first century speakers did not use the word “widower.” My hunch is that they didn’t use it because of the negative social connotation attached to the term. In the first century, a widow was not only bereft of her husband, she was also often destitute. It was a patriarchal culture, and to be without a husband was to be in an extremely vulnerable position. That vulnerability is why the “widows” and “orphans” are often paired together in the Bible (e.g. James 1:27). In a patriarchal culture where there’s no social security safety net, widows and orphans are extremely socially disadvantaged.

A husband who lost his wife in that culture did not experience the same social hardship that a widow did. A widow is unmarried and destitute. But a man who loses his wife is simply unmarried. He is not destitute. And I suspect that is why Paul and other Greek writers didn’t use the term widower to refer to such men. They were simply “unmarried.”

And what does Paul say to these widows and widowers?

“It is good for them to remain single, as I am.”

I would tweak one small thing about the ESV rendering. It’s not as literal as it could be. There is no Greek term that corresponds to the word “single.” So if you just drop that word, it gives you a more literal sense:

“Remain” means to continue on in a certain state of existence. In their case, that state was one of widowhood. And Paul says “as I am.” This suggests that Paul is putting himself into the same category that they are. But it is not a category of singleness in general but a category of widowhood in particular. It is for this reason that many interpreters—including myself—believe that these words imply that Paul was previously married.

I don’t believe it is the case that Paul was never married. In fact, it would have been nearly unthinkable to imagine a never-married Pharisee. As an exemplary Pharisee (Philippians 3:5-6), Paul would have sought to fulfill the creation mandate to “be fruitful and multiply,” which means he almost certainly would have been married at some point. And verse 8 seems to confirm that he was in fact married but subsequently widowed.

How has Paul spent his life since becoming a widower? He has completely devoted himself to the gospel ministry. Marriage has certain responsibilities that come with it. And Paul was thrilled to remain free from those responsibilities so that he could pursue with single-minded devotion the ministry to which God had called him.

Think about it. Could Paul have travelled all over the Roman world for two decades if he had a wife and children at home to care for? Of course not. Paul is simply expressing here that “it is good” for widows and widowers to choose to remain unattached for similar purposes. They don’t have to feel any pressure to remarry simply because they were married before. God may give them a post-marriage life like Paul has. And if so, it is not a less-than life. It is a glorious calling to remain “unmarried.”

But then Paul qualifies:

9 But if they cannot exercise self-control, they should marry. For it is better to marry than to burn with passion.

The text doesn’t actually say if they cannot exercise self-control. It says if they are not exercising self-control. It does not necessarily refer to a sinful lack of self-control. It could be referring to one who finds their desire for marital relations to be a constant distraction. Paul is simply saying that if you find yourself in that situation, then you should get married. Of course, Paul understands that not everyone has the same opportunities to marry, so I think he means that it is good and right to pursue marriage if or when the opportunity emerges. Paul’s “unmarried” example should not at all constrain a believing widow or widower from remarrying. Why?

“For it is better to marry than to burn…”

When I first began teaching as a college professor, I was actually teaching this very text in one of my classes. I had a classroom of undergraduates before me, all of whom were in the vicinity of 18-21 years old—except for one student. I had one elderly widow in that class who was 83 years old. And she had decided that she wanted to come back to school and learn the Bible, and so there she was in the midst of all these whipper-snapper undergraduates. And it was great.

But I was teaching this text about widows, and when I laid out the interpretive options (“it is better to marry than to burn with passion” or “to burn in judgment”), she spoke up and interjected with force and conviction. She said, “Oh, I think it means to burn with passion.” I remember at that moment being kind of stunned because it was clear that she had not studied this before, but she nevertheless spoke with great confidence about her interpretation. And I tried not to break into too big of a smile as the realization came over me—and the rest of the class—that her exclamation was more of a testimony than exegesis.

But I never forgot what she said because I think it rang really true. I think she understood this text exactly in the right way, and she spoke from experience. It is better to marry than to burn with passion.

Marriage is certainly a better alternative to the constant distraction of a desire for marital relations. If that is a constant distraction for you—especially if God brings some particular person into your life—then you are just fine to get married. Don’t feel constrained by Paul’s example. Go ahead and get married, and don’t look back. Staying unmarried like Paul is good. Getting married is good too. Each one has his own calling from the Lord, and we come to know that calling through the gifts and opportunities God gives us—or withholds from us. And if God gives you the opportunity to be married and you want to be married, go for it.

But if that opportunity does not come your way—even though you wish it would—just keep in mind what Paul says. Paul says you are in a better position. You are not at a disadvantage in God’s kingdom by remaining unmarried. Steward that calling well for as long as you have it. Ask God to make the paths plain for the “unmarried” calling he’s given you. It may be a season, or it may be for life. God will make that plain in due time. In the meantime, don’t despair of your calling. Lean into it for the glory of God.