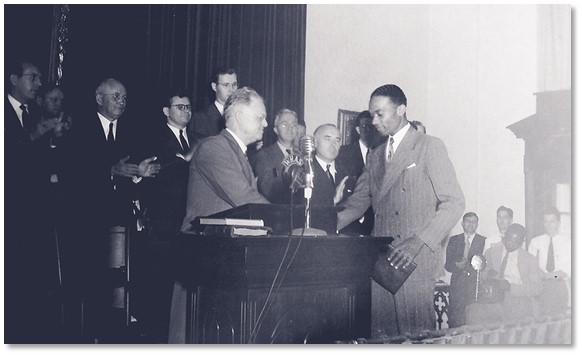 In late 2017, Southern Seminary President R. Albert Mohler Jr. appointed a committee of six persons to prepare a report on the legacy of slavery and racism in the history of the Southern Baptist Theological Seminary. Today, that report was released.

We all know the sad history of slavery and racism in the SBC, and we know that SBTS has been part of that story going back to 1859. Still, it is heart-breaking to read the particulars, and this report has those. I am grateful for my colleagues who worked for the last year to produce this report—Curtis Woods, John Wilsey, Kevin Jones, Jarvis Williams, Matt Hall, and Greg Wills. Well done.

There is much that could be said about this history, but I will comment on one name that stood out–Garland Offutt (pictured above). In 1944, Dr. Offutt was the first black graduate of Southern Seminary. Even though SBTS had taken the step to integrate, they still would not allow Dr. Offutt to participate in commencement. Why? Because he was black.

And this is but one story. There are many more. Read the rest of the report for yourself, and lament.

Below is a summary of the findings of the full report:

Read the rest of the report below or download here.