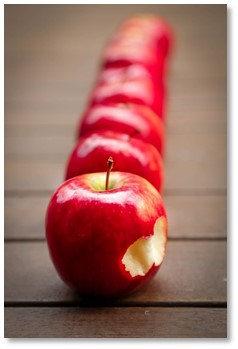 When Matthew Vines’ book God and the Gay Christian came out in 2014, I could hardly have imagined how much of an impact it would have among evangelicals. Nevertheless, it has had an impact. Some of the high-profile evangelicals (e.g. Jen Hatmaker) who have come out affirming gay marriage have done so on the basis of arguments found in Vines’ book.

Among the ideas from Vines’ book that I still see gaining purchase among evangelicals is a particular hermeneutical oddity that Vines draws from Jesus’ teaching about “trees” and “fruit” in Matthew 7:15-20, where Jesus says,

Every good tree bears good fruit; but the bad tree bears bad fruit. A good tree cannot produce bad fruit, nor can a bad tree produce good fruit. Every tree that does not bear good fruit is cut down and thrown into the fire. So then, you will know them by their fruits.

Whereas Jesus applies this to false teachers, Vines applies the principle in a way that goes against the way Jesus intended it. Vines writes,

The earliest Christians used a similar, experience-based test when making what was one of the most important decisions in church history: whether to include Gentiles in the church without forcing them to be circumcised and to obey the Old Testament law. As Peter declared of early Gentile believers, “God, who knows the heart, showed that he accepted them by giving the Holy Spirit to them, just as he did to us…. Now then, why do you try to test God by putting on the necks of Gentiles a yoke that neither we nor our ancestors have been able to bear?” (Acts 15:8, 10). The early church made a profoundly important decision based on Peter’s testimony. Gentiles were included in the church, and the church recognized that the old law was no longer binding…

Neither Peter in his work to include Gentiles in the church nor the abolitionists in their campaign against slavery argued that their experience should take precedence over Scripture. But they both made the case that their experience should cause Christians to reconsider long-held interpretations of Scripture. Today, we are still responsible for testing our beliefs in light of their outcomes—a duty in line with Jesus’ teaching about trees and their fruit (God and the Gay Christian, pp. 14-16).

Vines uses this “test the fruit” hermeneutic to test whether traditional interpretations of biblical texts are harmful or helpful to gay people. He concludes that traditional interpretations of texts like Romans 1:26-28 and 1 Corinthians 6:9-11 are harmful to gay people. So he reinterprets those and other texts of scripture in such a way that affirms committed gay relationships.

The bottom line is this. Vines twists Jesus’ teaching about fruit in Matthew 7:15-20 into a tool for suppressing biblical texts that clearly condemn homosexuality (e.g., Rom. 1:26-27; 1 Cor. 6:9-11; 1 Tim. 1:10). Because opposing homosexuality harms homosexuals (a bad fruit), the Bible’s prohibition on gay relationships are themselves a bad “tree.” Thus traditional texts must be reinterpreted in a way that is no longer harmful to gay people.

There are a number of serious problems with Vines’ “test the fruit” hermeneutic, not the least of which is the fact that it constitutes a complete misunderstanding of Jesus’ teaching about fruit. The “fruit” metaphor appears a number of times in Matthew’s gospel. Contrary to Vines, it does not signify bad outcomes generically. It’s talking about people (trees) and the deeds (fruit) that issue forth from their lives. In Matthew 3:8, “fruit” symbolizes behavior that comes from a repentant heart. In Matthew 12:33, “fruit” stands for blasphemous words which flow from an “evil” heart. In Matthew 13:8, 23, it signifies “a lifestyle which responds to the preaching of the word.”1

Here’s the key point to observe. The good or bad quality of the fruit is determined solely by its conformity to God’s revelation in Christ, not by any particular sinner’s subjective impression of it. Vines’ misuse of Matthew 7:15-20 would create ethical anarchy if applied consistently. For example, it may cause someone personal distress and psychological “harm” to tell them that stealing is wrong. That distress would be a “bad fruit” on Vines’ definition, yet it would be absurd to conclude that the 8th commandment itself is a bad tree. Would Vines justify stealing in order to avoid the “bad fruit” of making a thief feel badly? Vines’ reading is no way to construct an ethical theory, and it is not a faithful application of Jesus’ words in Matthew.

Nevertheless, this is exactly how Vines approaches the issue of homosexuality vis a vis Matthew 7:15-20. He alleges a variety of negative consequences that flow from calling homosexuality a sin. We must, therefore, modify/reinterpret the Bible so that people no longer feel badly about the Bible’s sexual ethic. On this basis, Vines sweeps away the entire 2,000-year old consensus of the Christian church. The church’s understanding of scripture causes some people to feel badly, so it must be done away with.

Matthew 7:15-20 does have a warning for us, but not the one that Vines alleges. It warns us to watch out for wolves in sheep’s clothing. In this instance, Vines is concealing the wolf of consequentialism in the clothing of Matthew 7. In doing so, he manipulates readers so that they feel they are doing the right thing when they suppress the message of key biblical texts. Readers would do well not to be taken in by this false teaching.

Jesus says that his commands are not burdensome (Matt. 11:28-30), but Vines says that they are not only burdensome but also harmful to gay people. Who is right? Vines or Jesus? Hopefully disciples of Jesus will find the answer to that question fairly obvious.

The problem we are having today is that some evangelicals have latched onto Vines’ “test the fruit” hermeneutic, and this way of adjudicating doctrines is a poison pill. It removes authority from the word of God and gives the reader the authority to scrutinize the Bible’s truthfulness based on whether or not it hurts people’s feelings. This is no way to read the Bible. And it is no way to determine the truth about one of the most contested ethical questions of our time.

If we are listening carefully to the words of Jesus in Matthew 7:15-20, we would see that they are highlighting for us a wolf in sheep’s clothing. In this case, the false teacher is using Jesus’ own words as sheep’s clothing.4 Let us hope and pray that the real sheep will detect the ruse.

4 “Matthew Vines’ Reformation Project, promoting full inclusion of LGBTQ people by reforming church teaching, is founded on this faulty concept of ‘bad fruit.’ If a leader blatantly takes Scripture out of context like this, twisting the Bible to say what it doesn’t say, everything else he teaches should be suspect.” See Christopher Yuan, Holy Sexuality and the Gospel: Sex, Desire, and Relationships Shaped by God’s Grand Story (Colorado Springs, CO: Multnomah, 2018), 155.

A Discussion about “Gay Christianity” with Becket Cook