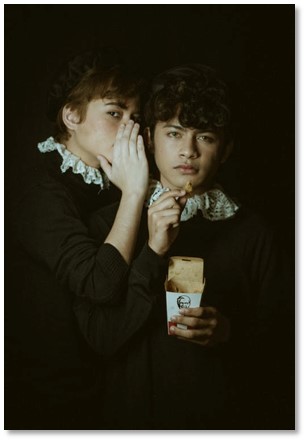 I’ve read two different reports this week from Christian news sites written specifically to refute what amounts to online gossip and slander. I’m thankful that the stories were written even as I grieve that they needed to be written. They are worthy reports, but I’m not even going to link them here so as not to give any more oxygen to the slanders they were written to refute.

It is astonishing how many people run gossip-blogs or gossip-social-media accounts in the name of Christ and of “discernment.” Even more astonishing to me is how many readers mistake such gossip and slander for actual discernment.

Of course, we are all tempted to speak carelessly from time to time, especially when we feel like our cause is just or when we feel like we’ve been wronged. Nevertheless, the book of James warns us of the enormous power our words have—of their potential for great good and for great harm (James 3:6-10).

People tend to understand that in polite conversation some things just ought not be said. In face to face encounters, we know that a certain sense of propriety ought to govern what we say and how we say it. Yet this is often forgotten in online interactions. For some reason, people feel free to let loose online with things they would never say in person. This is a hopeless hypocrisy, yet there it is. That is why I am convinced that Christians need to revive the wisdom of Solomon in their online speech.

The book of Proverbs teaches us that “The tongue of the wise makes knowledge acceptable” (Prov. 15:2). It also says that “Sweetness of speech increases persuasiveness” (Prov. 16:21). The Lord Jesus Himself was no stranger to controversy (Matt. 12:34; 23:31). Nevertheless, it was said of Him that “All were speaking well of Him and wondering at the gracious words which were falling from His lips” (Luke 4:22).

Does the tone of your online speech make your arguments more or less persuasive? When people are offended by you, are they put off by what you are saying or by how you are saying it? Do people marvel at the gracious words that proceed from your keyboard in the midst of controversy?

The goal of this post is a very practical one. I want us all to consider how we might avoid gossip and slander and might disagree without being disagreeable in our online interactions. In short, how can we be more Christlike in controversy?

Before offering any advice, let me make a confession. I am not innocent of the behavior that the Bible rebukes. I am a sinner at heart, though hopefully a repentant one. If anyone needs the wisdom of the Proverbs on these points, it’s me. This is an area in which we could all do better, and hopefully this advice might keep us from becoming what we are attempting to correct (Matt. 7:5; Gal. 6:1).

We have a responsibility collectively as Christians to be vigilant about these things. We are so easily drawn into writing about or reading things that we ought not be giving any attention to. And remember: “click”-attention is what keeps the gossip bloggers alive.

For what it’s worth, I think we would all do well for a little heart-check. So here’s some advice from your fellow-flawed traveler:

1. Do not bear false witness. The Devil is the father of lies. Don’t be like him. Be like Jesus who was truthful in everything that he spoke.

Exodus 20:16, “Thou shalt not bear false witness against thy neighbour.”

2. Be wise in your associations and in who you lend credibility to. Let’s starve the online gossips and slanderers of the attention that they crave.

Proverbs 20:19, “He who goes about as a slanderer reveals secrets, Therefore do not associate with a gossip.”

3. Fortify your own soul against gossip and slander by neither participating in it nor listening to it.

Proverbs 26:20, “Without wood, fire goes out; without a gossip, conflict dies down.”

4. Remember that gossip and slander will be a corrupting influence over your soul if you take it in.

Proverbs 18:8, “The words of a gossip are like choice morsels; they go down into the person’s innermost being.”

5. Remember the enormous power your speech has either for good or for ill.

James 3:6-10, “6 The tongue is a fire, the very world of iniquity; the tongue is set among our members as that which defiles the entire body, and sets on fire the course of our life, and is set on fire by hell. 7 For every species of beasts and birds, of reptiles and creatures of the sea, is tamed, and has been tamed by the human race. 8 But no one can tame the tongue; it is a restless evil and full of deadly poison. 9 With it we bless our Lord and Father; and with it we curse men, who have been made in the likeness of God; 10 from the same mouth come both blessing and cursing. My brethren, these things ought not to be this way.”

6. Recognize foolish speech when you read it. There are “trolls” online who trade in foolish speech. Their communication often involves outlandish, rude, and slanderous commentary. This kind of troll is not someone who simply disagrees with you. In fact, you might even find yourself involved in a thread in which the troll agrees with your point of view! The issue here has less to do with the substance of a debate than it does with the tone. Online trolls are often prone to unqualified hyperbole, name-calling, caricature, and insults. In short, the online troll fits the profile of the proverbial “fool” who is not able to control his tongue.

Proverbs 18:2, “A fool does not delight in understanding, But only in revealing his own mind.”
Proverbs 12:18, “There is one who speaks rashly like the thrusts of a sword, But the tongue of the wise brings healing.”
Proverbs 15:2, 4, “2 The tongue of the wise makes knowledge acceptable, But the mouth of fools spouts folly…4 A soothing tongue is a tree of life, But perversion in it crushes the spirit.”

7. Do not respond in kind to foolish speech. Online trolls feed on arousing the ire of their targets. If you feed an online troll by equaling his vitriol, then he will come back for more. More times than not, the way of wisdom will be not to offer any response at all to such foolish speech (Prov. 26:4). At other times, wisdom will call for confrontation and speaking the truth in love (Prov. 26:5). When the latter is the case, do not imitate the rhetoric of the fool. Instead, speak with clarity and respect in the midst of disagreement (Prov. 15:1).

Proverbs 26:4, “Do not answer a fool according to his folly, Lest you also be like him.”
Proverbs 26:5, “Answer a fool as his folly deserves, Lest he be wise in his own eyes.”
Proverbs 15:1, “A gentle answer turns away wrath, But a harsh word stirs up anger.”

Proverbs 17:10, “A rebuke goes deeper into one who has understanding Than a hundred blows into a fool.”
Proverbs 27:22, “Though you grind a fool in a mortar, grinding him like grain with a pestle, you will not remove his folly from him.”

9. Recognize that a fool thinks his foolish speech if vindicated by his righteous cause. For this reason, avoid demanding apologies from an online troll. He is “wise in his own eyes.” So asking for an apology generally encourages him to dig in and to defend the righteousness of his cause all the more. This leads to more rude and caustic commentary, and the cycle starts all over again.

10. Be Holy in Your Speech, including your online speech. If you sin publicly, repent publicly, and do better going forward. Be conformed to Christ in your speech.

Colossians 4:6, “Let your speech always be with grace, seasoned, as it were, with salt, so that you may know how you should respond to each person.”

As followers of Christ, we have to recognize that Christ’s lordship extends to our speech. If his Lordship is absent from our speech and we become vicious gossips and slanderers, then we have to ask whether Christ is our Lord at all. After all, it’s not the ones who call him “Lord” who are truly disciples but those who do what the Lord says (Matt. 7:21).

We will always have disagreements, and some of those disagreements will come out into the open in online forums. There is nothing wrong with that per se. What is wrong is when disagreement turns into gossip, slander, and vicious speech. These vices are a reproach on the name of Christ that we all need to renounce and to flee from—whether in person or online.